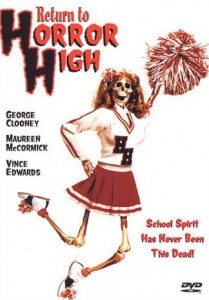 I really, really love movies, and I watch a lot of them.  You name it, I’ll watch it. Some of them are good, and some are bad.  Hell, I love movies so much that I even like a lot of the bad ones more than I should.  I mean, usually even the stinkers have some redeeming qualities.  It’s truly rare that I see a movie about which I have little or nothing positive to say. Sadly, Return to Horror High, directed by Bill Froehlich, is that movie.

Made in 1987, Return to Horror High stars Maureen McCormick, Vince Edwards, Lori Lethin, Alex Rocco and George Clooney.  Now, I know this flick has its fans, but I found its plot to be derivative and full of over-used horror movie tropes: In 1982, there was a series of brutal murders at a high school.  A few years later, a film crew invades the now-abandoned campus to make a movie about the murders.  Guess what happens—that’s right, the murders begin again.  One by one, the movie crew starts to die.  This flick’s main attempt at cleverness is an irritating narrative device that completely prevents the audience from caring about the characters, which is big mistake for a horror flick.  Each scene is presented as if it’s “actually happening,” but when it ends, we discover that it was really a scene being filmed for the movie within the movie.  So, as we watch events and their consequences unfold, we immediately learn that what we saw didn’t really happen.  This is repeated over and over and over again.  Of course, this being a slasher flick, people do begin to die…or do they? 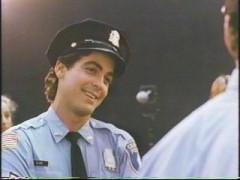 That’s another thing about this movie—it’s exceedingly hard to follow.  To tell you the truth, I’m still not exactly sure what happened.  It’s good for horror movies to misdirect you and make you play detective, but they shouldn’t confuse and irritate you. Several times, I found myself asking, “Is that character dead?  Or is s/he just dead in the movie within the movie…again?”  And the film’s end did nothing to clear any of it up for me.  It just made it more confusing.  Now, if the movie made me care enough, I would rewatch it and delight in figuring out its mysteries.  But because the filmmakers effectively kept me from becoming emotionally involved, that’s probably not going to happen. 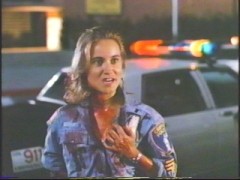 Though I can’t recommend this movie, I am going to attempt to find a couple of good things to say about it.  Here goes.  Well, it actually looks pretty good.  It’s well lighted, and the camera work is competent. And there are a couple of decent performances.  Lori Lethin, the female lead, is attractive and engaging.  Alex Rocco is entertaining, as he usually is, but his role is a cliché.  Maureen McCormick (Marcia from TV’s The Brady Bunch) gets better as the film goes along.  She’s somewhat sexy as a police officer who seems a tad too excited about the murders.  The top-billed George Clooney is only in the film for about ten minutes, so don’t rent it just because he appears. He doesn’t last long.

Return to Horror High was meta before meta was cool.  And if it had been done well here, it might’ve been the flick to start the meta craze.  But, instead, we had to wait more than a decade for Scream to come along and do it right.  I suggest you go rent that movie if you’re in the mood for a self-referential high school slasher flick.  Leave Return to Horror High in detention where it belongs.

This article was posted in Reviews and tagged Alex Rocco, George Clooney, horror, Maureen McCormick, meta, Return to Horror High, Reviews, Slammed & Damned, The Brady Bunch, Theron Neel. Bookmark the permalink. Follow comments with the RSS feed for this post.Trackbacks are closed, but you can Post a Comment.