In her 1987 film, Near Dark, Kathryn Bigelow pulls off a neat trick.  She combines a romantic fable with a violent, bloody vampire tale and tops it off with a touch of western—and somehow it all works.

Written by Bigelow and Eric Red (best known for Body Parts and the original version of The Hitcher), Near Dark is the story of Caleb and Mae, perhaps the quintessential star-crossed teen lovers. Caleb (Adrian Pasdar) is a good ol’ boy from Oklahoma, a roper and a rancher. Mae (Jenny Wright) is a sweet young thing who also happens to be a vampire.  How much more star-crossed can you get, right? They meet one night and are so taken with each other that Mae almost doesn’t feed on Caleb.  But after a passionate goodbye kiss, she decides to give him a little nip—the life of a vampire can get so very lonely and she thinks she’s found forever in his eyes.  As usual, trouble appears in the form of Mae’s “family,” who kidnaps Caleb to see if he’s got the stuff to live their life.

Near Dark is a quite unusual take on the vampire experience. The word “vampire” is never uttered, though there is talk of “turning” people and feeding. Mae’s family is basically a roving gang of sociopaths. They don’t fly, they travel by stolen car. Also, their weapons of choice are firearms, not fangs.  Not actually even having fangs, they just rip their victims’ throats open with their teeth and drink the blood. But true to the usual vampire mythos, they can take a shotgun blast to the belly and seem to have superhuman strength, but sunlight is the enemy, as is fire.

Bigelow’s casting choices have a lot to do with the film’s success. She chose wonderful actors whose careers were just beginning to take off.  Lance Henriksen plays Jesse Hooker, the patriarch of the family.  He’s been living the night life since the Civil War and wears a dirty old duster, not a cape and tux.  Bill Paxton plays Severen, the hell-raising “brother” who loves to kill, and has a great time doing it.  Paxton definitely gets the MVP award here.  His Severen steals every scene he’s in, chewing up the scenery as well as his victims.  The family is rounded out by Jenette Goldstein as Diamondback, the mother figure, and Joshua Miller as Homer, the little brother.  Miller is very good as the grown man trapped in a child’s body—evil yet pitiful.

The script for Near Dark is not as good as its cast, though.  It seems as if Red wrote the first draft and Bigelow did the subsequent rewrites.  And knowing Red’s past work, it’s pretty easy to pick out which scenes are his and which are Bigelow’s.  The purple prose and the big action set pieces, filled with bullets and explosions, have Red’s fingerprints all over them.  All the quiet talk between the two young lovers must belong to Bigelow.  You know the actors are good when they can pull off the clichés that are sprinkled throughout this movie: “The night has its price;”  “You haven’t met any girls like me;” and, of course, the classic “See you in hell.”  And it all boils down to a showdown on a deserted street in town. Why not?  To Bigelow’s credit, she handles it all with aplomb. 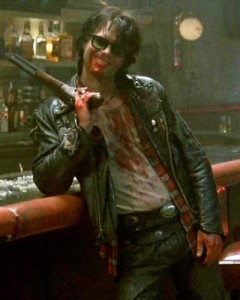 Due to the clashing influences of the two writers, this film is all over the place tonally. Moments of romantic bliss bump up against gory violence and dark humor, but Bigelow’s steady hand ensures everything flows and plays just right.  She is aided by one of Tangerine Dream’s most effective, and least dated, scores.

Over the years, Near Dark has acquired a bit of a cult following, and deservedly so. (It’s much more deserving than Twilight.) Any horror flick that’s filled with such striking imagery and whose characters spout lines like “Listen to the night, it’s deafening” and then suddenly rip someone’s throat out? Well, that’s a pretty cool film. But if, at the end of that film, you can say “aww, that was sweet” and really mean it? Well, my friends, that is something of a wonder.