The Last House on the Left

The ’70s were an era of radical change in all styles of motion pictures.  Mainstream, big-budget fare such as Midnight Cowboy and A Clockwork Orange pushed the envelope in terms of violence and sexuality, drawing praise as often as criticism.  Looking back at these movies today, it’s often hard to see what all the fuss was about.  Of course, ’70s horror cinema had its share of controversial films as well.  One of the most notorious was The Last House on the Left, the directorial debut of the legendary Wes Craven.

Released in 1972, The Last House on the Left was one of the first of what has become a quite popular horror subgenre: the rape/revenge flick.  Most rape/revenge films follow a common blueprint—Act One: A woman is brutally beaten, raped and left for dead. Act Two: The victim recovers from her ordeal and prepares to avenge herself. Act Three: The woman systematically tortures and kills her attackers.  A common variation has the rapists kill the victim during the assault and her family takes revenge.

The Last House on the Left follows this alternate formula.  Small-town girl Mari Collingwood (Sandra Cassel) decides to celebrate her seventeenth birthday by attending a rock concert in the big city with her friend Phyllis (Lucy Grantham), a “bad” girl whose blue-collar family background worries Mari’s parents.  When the girls decide to try to score some pot, they encounter Sadie, Krug, Weasel and Junior, a thrill-seeking gang of escaped convicts on the run from the police and looking for a little action.  Of course, if Mari and Phyllis had not been walking on the wild side, they would have never run into trouble.  This is another ingredient of most modern horror flicks: the punishment element.  And punished they are.  After raping, torturing and murdering the girls, the sociopaths dump their bodies in the woods near Mari’s house and attempt to flee town.  In an ironic twist of fate, they end up at Mari’s house as guests.  I think you can see where this is going.

Wes Craven made some interesting choices for this film.  While much of the movie’s terror is played realistically, Craven regularly breaks the mood with slapstick humor and cornball music that effectively takes us out of the story.  Also, The Last House on the Left is very much a product of its time.  There is a palpable air of “us versus them” throughout the movie—the establishment versus the youth culture.  Hippies mock the police, parents express concern about rock music.  Considering the cultural climate of the era and the film’s reception at the time, the film itself can be seen as blow against The Man.

All of these things add up to a film that is, for the most part, best viewed as a time capsule. There are some scenes of gore and sex that were extreme for the ‘70s and for which some important censorship battles were fought.  The members of the cast are good, but nobody delivers a stand-out performance.  As Krug, the leader of the gang, David Hess is the most effective actor.  Fred J. Lincoln, who plays Weasel, is most notable for his career following this film.  He went on to become an extremely prolific producer and director of pornography. 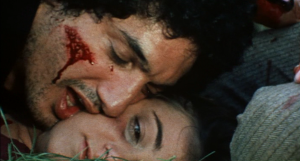 This article was posted in Reviews and tagged '70s, censorship, hippies, historical, horror, I Spit on Your Grave, revenge, Reviews, sexuality, Slammed & Damned, The Last House on the Left, Theron Neel, violence, Wes Craven. Bookmark the permalink. Follow comments with the RSS feed for this post.Trackbacks are closed, but you can Post a Comment.