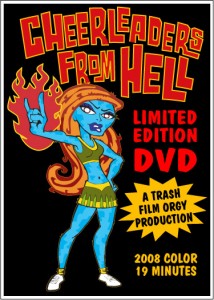 Poor little Penny. It’s bad enough being a wallflower. But when her sister, a popular cheerleader, dies in a freak plane explosion while on the way to a cheerleading competition, it seems like life can’t get any worse. Of course, it can and it does. One day soon after the tragedy, Penny is brutalized by a marauding gang of thugs. While confiding in her best friend (a talking plush bunny rabbit), she decides that she must have revenge—at any cost. The local juju man, Uncle Harley (Keith Letl), helps her cast a spell that guarantees her enemies get their just desserts, in ways most cruel and foul.

Written and directed by Darin Wood, and produced and shot by Christy Savage, Cheerleaders From Hell had a total production time of less than a month, but it’s an incredible little flick. Considering the production schedule and microbudget, it’s amazing what TFO delivered. The film looks and sounds first-rate, and the special effects are remarkable throughout. The shot choices are smart and stylized, telling the story quite effectively. For you spatterhounds, there’s some awesome gore on display (my favorite gag involves a displaced spinal column). And the performances are solid, with great work coming from actresses Tess Thomas and Stephanie Hyden. When you add some cool tunes from the Teenage Harlets and the Secretions, you get a flick that rivals (and possibly surpasses) Monster From Bikini Beach in both quality and execution. My only complaint is that it ends too soon. 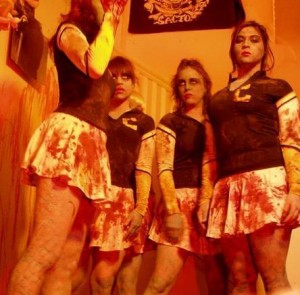 Cheerleaders From Hell played to raves during the 2008 Sacramento Horror Film Festival and will be part of the upcoming online Fangoria Film Festival. I’ll pass on details when I know more.