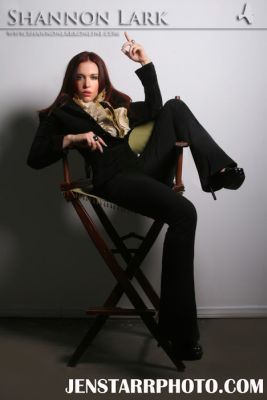 Model, actress, director, gore wrangler―that’s right, I can only be talking about one woman: Shannon Lark. As the brains behind horror collective The Chainsaw Mafia, an activist for women in horror, the first-ever Fangoria Spooksmodel, and former manager and FX whiz for the dance company The Living Dead Girlz, Shannon is definitely becoming a force to be reckoned with. A few months ago, I was lucky enough to have a chat with this beautiful young overachiever about, well, almost everything.

Hi, Shannon.  Thanks so much for talking with me.  Tell me something. You’re a writer, actor, dancer, director, editor, gore wrangler―when do you find time to sleep?  Or do you?

I don’t sleep a lot, actually. It takes a constant driving force for stay on top of everything…and even then I still need help, which I get from my executive assistant, Michelle Fatale.

An artist who does a bunch of different projects definitely needs assistance from others, which is something I’ve needed to teach myself to do―allow others to help.

There are probably more women involved in horror than ever before—not just filmmakers, but there are also female writers and female-centric websites such as Pretty-Scary. Why do you think that is? Why is now the time?

I think there are more women involved in the entire film industry than ever before. It’s a natural state of involvement that was bound to happen. I think in the next 10 years, we are going to see that number double, and I really hope to help make that happen. The more [that] women become involved and give to the genre, the more women will become involved. It’s gonna be like a really cool chick’s club, except without all the sappy crappy movies.

You are a trailblazer! Can you tell me a little about The Chainsaw Mafia and Living Dead Girlz.

The Chainsaw Mafia is my horror production company (soon to be a retail store) and a networking board for horror filmmakers. Membership is free, and we encourage members to post about their productions and try to hook up with other filmmakers.

TCM’s motto is “Bring your daughter to the slaughter,” and while we encourage women to get involved by hosting VISCERA, a film festival for female directors/producers, men are strongly encouraged to be members as well. We will soon be releasing a retail store for horror filmmakers and lovers, selling everything from director’s chairs to special effects to little zombies you can play with. Yay!

The Living Dead Girlz is a zombie dance troupe based in San Francisco. I [used to] manage and create special effects for the troupe, and Amber Steele directs and choreographs. We create shows based around empowering females, and [we] spray blood/brains/intestines on the crowd. We performed the 2007 Fangoria Convention Circuit and are currently booking a tour for 2008. More information will be provided shortly! You can check out our most recent creation, which is a parody of the Shoes video by Kelly. It’s called Brains and is available on YouTube.

You are very much an advocate for women in the world of horror. But you’re also very much a sex symbol. Do you have any trouble reconciling those two parts of yourself?

I used to, but not so much anymore. Before, I knew what I felt comfortable with and what I wanted to see change in the roles of women in my lifetime, but I didn’t exactly know how to demonstrate it. Being a woman makes it confusing as well, because females have a lot of societal pressure, and a good amount of that is displayed through the [horror] genre.

My work through the Living Dead Girlz has helped exponentially with the issue. We are sexy females getting on stage to dance with many different provocative moves and dress, but there is a fine line that a female must walk when they are displaying sexuality in their art.

We don’t have choreography that simply displays sexuality. We aren’t a titty show, and the sexuality we express in our movements [is that of] strong, independent, funny females. We always wrap our stories around a greater purpose that has a much deeper meaning than simply stripping down to our lingerie and conducting a chair dance.

Sex and the display of sexual nature, which is such a natural thing for humans to experience, shouldn’t be seen in a negative light. But I think there is a way to express it that can demand respect and show the infinite beauty of sexuality and humanity, and there is [also] a way to demonstrate it that is demoralizing and inelegant. It really depends on how you do it.

The way you set up your shots, what you wear, the dialogue, the situation, the story―everything determines how that sexuality is going to come through to the audience. I’m just really careful with everything I do.

Good point. Speaking of sexy, I’m going to say it—I voted for you as Miss Horrorfest 2007/2008. There was a bit of a scandal surrounding the contest. Although you didn’t win, many believed you were the true victor. Do you care to comment on it now that it’s behind you?

Ooh!  Yay! I would love to! I’m really, really glad I wasn’t chosen, because then I would have to ask them if I could do this interview, and it might have been denied. [Editor’s note: Awww!]

I hold my love for the genre very close to my heart. I will constantly be creating, no matter what. Working for a corporation would have put a huge obstacle in my way. I’ve pushed my career to where it is and feel better to keep creating opportunities for myself, no matter if a company thinks I’m right for a job or not. I wish Mistress Malice (Miss Horrorfest 2008) and Nixon (runner-up) all the best!