Blood Feast 2: All U Can Eat

When it was released in 1963, Blood Feast was shocking. Generally regarded as the first “gore” film, it might not have been very good, but it was, if nothing else, one of a kind. Brought to us by Herschell Gordon Lewis and David F. Friedman, the flick was reviled upon release but has since risen in the canon of cult films to a place of near worship. Now, almost 40 years after the original film’s debut, a sequel has been bestowed upon us.

Making a sequel to a beloved cult classic is a tricky venture. You have to approach the material with reverence for the first film, but with an eye on making the new film relevant for a new generation. Blood Feast 2: All U Can Eat definitely has the right pedigree. It was directed by Lewis and produced by Friedman. But its tone is completely different than the original film. Where Blood Feast was a plodding slog with little intentional humor, Blood Feast 2 is a spoof in the Airplane mold. While the acting is broad and the gags are broader, abundant gore—the true star of the show— is front and center. And that’s really all that matters.

Fuad Ramses III, the grandson of the maniac in Blood Feast, has inherited his grandfather’s catering shop. He comes to town with the best intentions, planning to reopen the business and be the best caterer he can. Little does he know that in his storeroom waits the same statue of Ishtar that possessed his grandfather and caused him to become a cannibalistic serial killer. As soon as Fuad III lays eyes on it, the statue also takes control of him. He will prepare a blood feast for his goddess as his grandfather did, using nubile young women gathered from the wedding party of his very first client. His devotion may be absolute, but his business sense is awful.

If you’ve seen the original film, you realize this is almost the exact same setup and you also know how it ends. Lots of blood, a few breasts and the killer dies in the end. For fright fans, there are many subtle references to the first film throughout, as well as little nods to current horror flicks. One interesting change from the first movie is the way the gore is filmed. In the first flick, it was filmed quite starkly and innocently. Lewis and Friedman were trying something new and it showed. The gore was presented somewhat unsurely, as if the filmmakers were saying, “And now, look at this. Whaddya think?” In Blood Feast 2, the gore is filmed knowingly, with the loving attention that is rightfully lavished upon any movie’s star. It is lighted perfectly. The close-ups are plentiful and exaggerated. The filmmakers are saying, “And now, here’s the main attraction. Isn’t it wonderful?” And wonderful it is—inventive too: eyes are scooped out with a melon baller; brains are pulled through an ear with a corkcrew; intestines are fingered lovingly; throats are slit slowly; scalping morphs into the skinning of a face. This movie is a love letter to splatterhounds. 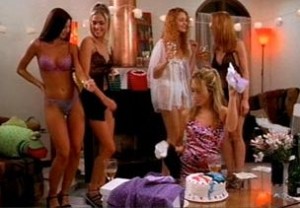 And the gore is not the only thing ramped up. The number of naked women has increased as well. There’s even a nudie scene where the bridesmaids have gathered for a lingerie shower that looks as if Fred Olen Ray stepped in to direct. If you’ve ever seen a Cinemax After Dark flick, you know what it I mean. It seems Lewis has been taking notes over the years.

I think the humorous approach taken works for the film. Tongue-in-cheek fits the material. These days, gore flicks are usually serious affairs. Blood Feast was born from the sideshow/carny tradition. Blood Feast 2 feels more burlesque: Why not give the audience a few jokes before you trot out the star of the show. One of the better gags involves a cameo from John Waters, one of H. G. Lewis’ filmmaking heirs. Talk about coming full circle. The Wizard of Gore meets the Sultan of Sleaze. There’s a poetic symmetry here that has to make a cult film fan smile. And I did.