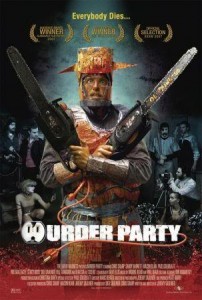 Written and directed in 2007 by Jeremy Saulnier, Murder Party is very much a group project. Coming from an artistic collective called The Lab of Madness, many of the film’s actors also perform some behind-the-scenes function. Upon its initial release, the film garnered awards at many of the major festivals around the country and received a lot of buzz.

The flick has an intriguing setup. It’s Halloween night and Christopher (Chris Sharp), a dweeby, bookish young man, is making his way home from work. As he walks down the street, he comes across a black envelope fluttering by. When he opens it, he discovers an invitation to a party…yes, a murder party. Personally, I’d be a bit put off by the invitation’s ominous directive to “come alone.” I mean, sheesh, it is a murder party—it says so right on the invite. But Christopher has nothing waiting for him except his (scene-stealing) cat, so who am I to judge. Once home, he handily constructs a fairly elaborate costume and, being the nice guy that he is, even makes some pumpkin bread to take to the gathering (never go to a party empty-handed, even if the hosts plan to kill you…it’s just bad form). When he arrives at the shindig, he discovers a group of petulant, eccentric artistes sitting around waiting for him to arrive. It seems Christopher is the guest of honor, as well as the subject of the clique’s next project: murder as art. 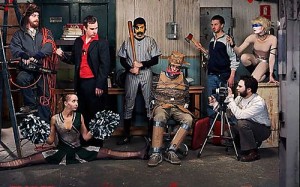 Murder Party is an interesting film for a few reasons, some positive and some negative. Positive: First, it’s a very well-made movie. The production values are great, and the camera work is fantastic. The effects are really good, with some wonderfully gory splatter at play. Also, all of the performances are first-rate. Special credit goes to Paul Goldblatt (Paul, the fussy photog), Stacy Rock (Lexi, the slutty cokehead) and Chris Sharp (Christopher, the victim/subject). Negative: Murder Party is a bit self-defeating. Most of the characters are whiny and arrogant poseurs, without an original thought in their heads…but that’s kinda the point. There’s also an unusual pacing problem with the script. It’s common for movies to have problems in the third act. Here, the first and third acts are fine. It’s the second act that slows everything down. But there are also some genuinely funny moments and sharp dialogue here. (There’s a running gag that highlights the problems of using a chainsaw as a weapon that’s funnier every time we see it.) And the point is well made: a large part of the art scene truly is made up of self-congratulating fools who worry more about how they look than what they create. I’ve brushed up against this subculture off and on through the years, and I have to say Murder Party gets it right.

Half cultural critique, half horror flick, Murder Party is an ambitious film that succeeds on several fronts. That said, it also shoots itself in the foot. The filmmakers would do well to remember one simple fact: It’s hard to make an interesting film about characters that aren’t all that interesting.

This article was posted in Reviews and tagged chainsaw, gory, Halloween, horror, Jeremy Saulnier, Lab of Madness, Murder Party, Reviews, Slammed & Damned, splatter, Theron Neel, underground. Bookmark the permalink. Follow comments with the RSS feed for this post.Trackbacks are closed, but you can Post a Comment.