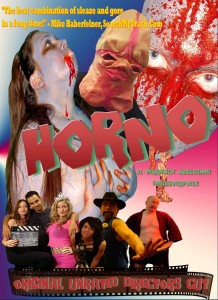 Self-described guerilla filmmaker Terrence Williams is back in action with his latest movie, a little piece of nastiness called Horno. Last seen in these parts promoting the unrepentantly offensive The Hood Has Eyez, with this film he’s delivered something a bit different. Is this a kinder, gentler Terrence Williams? Well, I wouldn’t go that far. Make no mistake, he’s still crude and distasteful, but Horno is a comedy. Of course, Williams being Williams, it’s not just any old comedy. It’s a comedy about drug-crazed killer sex zombies running wild during a porn shoot. So, you can relax. Williams is still an equal-opportunity offender. But this time out, he’s mixing a few guffaws with the gross. And it’s a recipe that makes for an entertaining flick.

Ron (Carlos Javier Castillo) is a porn director with a little more vision than talent, not that he has much of either. He aspires to greatness, but never quite achieves it—that is, until he comes up with the idea he’s sure will launch him to infamy: Children of the Cornhole, a horror/porno hybrid. Yes, it’s a “horno” film, one whose plot is brilliant in its pornographic simplicity: a zombie outbreak is being spread by legions of the undead bent on sodomizing anybody they can. Once Ron convinces his producer (an amusingly frog-voiced Kenneth Dunn) that it’s a profitable idea, he’s on his way to renown, if only in his own mind. He gathers together his rag-tag troupe of cast and crew in a hotel room and starts filming. But things go horribly wrong. All I’ll say is that life begins to imitate “art” in the worst possible way.

The micro-budgets and guerilla nature of Williams’ films dictate that the production values are at times questionable. While The Hood Has Eyez was a very well-made film in every aspect, Horno feels somewhat like a step back in some ways. It’s cool that Williams mixes different film styles to achieve different feels throughout, but at times the sound is really in need of some work. He knows how to set up a shot and has fun playing with the conventions of the genres he’s satirizing. Also, Williams always gets good work from his casts. Considering all his films are basically produced with a crew of two people, they are really impressive. I just want to see him do more. Luckily, I think I’ll get the chance soon.

While I enjoyed Horno, as I watched it I couldn’t shake the feeling that it’s a bit of a palette cleanser for Williams. And I think that actually may be the case. I’ve heard recently that he’s in pre-production on The Hood Has Eyes 2: Urban Nightmare. It looks like we’ll soon be seeing more rape and revenge in the urban jungle, and I can’t wait. That’s a setting Williams feels a little more at home in…not that there’s anything wrong with that.