When was the last time you had a good time at a horror movie?  No, I mean a really, really good time―you know, laughing and leering and gasping.  Well, I just finished watching Brain Dead, the new mutant zombie flick from horror legend Kevin S. Tenney, and I gotta tell you―it’s been a long time since I’ve had that much fun with a film.

A variety of people end up trapped in an old fishing cabin and end up fighting off a pack of zombie “meat puppets.”  It might sound like an overly familiar story, but as with any tale, it’s all in the telling.  And Tenney has long been a wonderful storyteller.  His career is full of movies that hit most every genre, often more than one at a time. He made his mark with classic ‘80s films such as Witchboard and Night of the Demons, but he’s been flying under the radar for the last few years.  Brain Dead is a fantastic return to the scene for him.

What is it about old, deserted cabins?  They always seem to draw stranded travelers of different stripes, who always seem to have the worst luck in the world.  It’s no different here.  Clarence (Joshua Benton) and Bob (David Crane) are jailbirds.  Clarence is lovable scamp with a smart mouth.  Bob is a murderer with a sour disposition and not a lot of smarts.  Unluckily for them, they’re handcuffed together and on the run.  Claudia (Michelle Tomlinson) and Sherry (Sarah Grant Brendecke) are hot young hikers with, let us say, a complicated relationship.  Unluckily for them, they get separated from their group.  And Reverend Farnsworth (Andy Forrest) and Amy (Cristina Tiberia) are holy sinners with a very unholy relationship.  Unluckily for them, their car breaks down.  In a horror-movie coincidence, they all find their way to the same old broken-down lodge. It looks like a stroke of much-needed luck for them all.  Little do they know, a cosmic twist of fate has unleashed a horde of brain-craving zombies upon that very same old, deserted lodge.  I think you can guess where it goes from there. 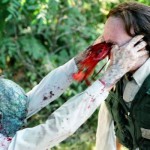 Tenney is at his best here.  He’s always been an accomplished filmmaker, but he displays a new-found maturity with Brain Dead.  Gone is the Hitchcock-inspired virtuosic camera movement; in its place is a subtler visual approach, typified by some slick scene transitions and well-handled special effects.  Speaking of effects, there are plenty to choose from in Brain Dead―everything from great creature makeup to blazing meteors hurtling through space.  And did I mention the gore?  There’s more than enough on display for even the most jaded splatterhound.  And reminiscent of the infamous lipstick gag in Night of the Demons, there’s even one scene that might make you say “ewwww,” but in a good way.  And I know you know what I mean. 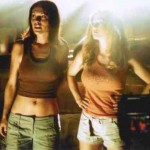 Dale Gelineau and his screenplay deserve much credit for the film’s success.  If it wasn’t for him, the actors would not have the delicious screwball banter to deliver.  Joshua Benton’s Clarence gets most of the flick’s best lines.  Part Han Solo, part Bruce Campbell, Benton is great here.  I hope we’ll be seeing more of him soon.  Michelle Tomlinson’s Claudia runs a close second though.  Last seen in superb thriller The Cellar Door, Tomlinson is cornering the market on tough chicks.  But here she gets a chance to be funny, and she makes the most of it.  Newcomer Sarah Grant Brendecke is quite good in an underwritten part.  She’s gorgeous and perky―everything we want in a horror heroine.  Plus she’s freakin’ hot, guys.  She and the foxy Tomlinson share a scene that will keep the fanboys hitting the rewind button for years to come.

Brain Dead is a blast.  Everything good about ‘80s horror flicks is here (the gore, the humor, the gratuitous female nudity) with none of the bad (the clothing, the hairstyles…and, well, everything else).  It’s rare that a director can effectively balance laughs with scares, but Tenney is a master.  Thank you, Kevin S. Tenney.  Oh, and welcome home.

This article was posted in Reviews and tagged '80s, Brain Dead, fun, gore, horror, Kevin S. Tenney, Michelle Tomlinson, mutant, Night of the Demons, Reviews, Slammed & Damned, The Cellar Door, Theron Neel, Witchboard, zombie. Bookmark the permalink. Follow comments with the RSS feed for this post.Trackbacks are closed, but you can Post a Comment.