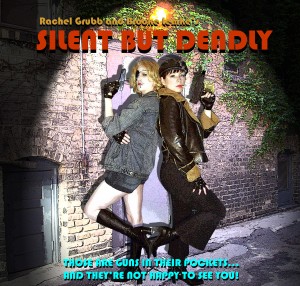 Let me tell you, that Rachel Grubb is a busy lady. First, we received the update about her upcoming horror flick Haunting Kira. And today, I opened my mail to an announcement of the upcoming theatrical premiere of the first three films from Silent-But-Deadly Productions, the production company led by Brooke Lemke and Ms. Grubb.

If you’re anywhere near Minneapolis, MN, on September 24, 2009, make sure to be at the Riverview Theater (3800 42nd Ave. S.) at 8:45p to catch Young Eyes (a short film by Ms. Lemke), A Broken Family (another short film by Ms. Lemke) and Why Am I in a Box? (a feature film by Ms. Grubb). There will be a Q&A with the ladies following the films. And if you can hang long enough, copious drinks will follow at a destination to be determined later.

Why Am I in a Box? is about a lazy writer and her deranged muse, while Young Eyes examines the dysfunction between young women and their self-images, and A Broken Family looks at family dysfunction.

DVDs will be available for purchase (a bargain at $15). Make sure to go to the Silent-But-Deadly site for more details.

This article was posted in Updates & Teasers! and tagged A Broken Family, Brooke Lemke, Haunting Kira, horror, Rachel Grubb, Silent-But-Deadly Productions, Slammed & Damned, Theron Neel, Updates & Teasers, Why Am I in a Box, Young Eyes. Bookmark the permalink. Follow comments with the RSS feed for this post.Trackbacks are closed, but you can Post a Comment.