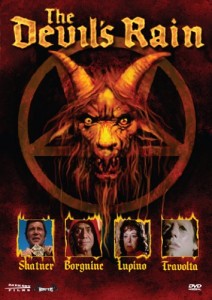 This review marks my first participation in the Final Girl Film Club of the amazingly overachieving Stacie Ponder. Please go check out Stacie’s blog, Final Girl. Spend time there, get to know her, take her home to meet your parents, but whatever you do, don’t try to stifle her need to be free. Cuz she hates that.

Oh, the ‘70s. They were something—leisure suits, Evel Knievel, bad movies about Sataniststs. It was a wonderful time to be alive, let me tell you. And speaking of bad ‘70s horror movies about Satanists, that reminds me. I just watched a little 1975 flick called The Devil’s Rain. I don’t know if I’d call it bad exactly. But I sure wouldn’t call it good.

Now as you know, I love B movies. They’re a wonderous wasteland for actors in various stages of their careers, and it was no different in the ‘70s. The Devil’s Rain stars William Shatner (post-Star Trek, pre-T.J. Hooker), Tom Skerritt (post-M*A*S*H, pre-Alien), John Travolta (pre-everything) and Ida Lupino, Eddie Albert, Keenan Wynn and Ernest Borgnine (all post-everything). This movie is one of those ‘70s films that feels like a TV movie but isn’t. I love those. And that’s why I can’t find it within myself to deem it bad. But it sure isn’t good. Did I say that already? 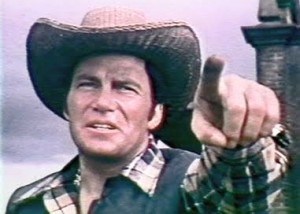 The film opens during a rainstorm (foreshadow much?), and golden-age film goddess Ida Lupino is in a tizzy. A cowboy-behatted William Shatner soon arrives to try to assuage her, but he’s unsuccessful. In this battle of overacting, Lupino easily defeats Shatner. The lesson here? Never mess with a pro. But they are both spanked handily by scene-stealing veteran character actor Woody Chambliss, who plays a senile handyman that resembles Karl Marx. See? How can this movie be truly bad? I haven’t even mentioned the guy with no eyes that melts in the rain.

The next scene takes Shatner to a ghost town, where he confronts Ernest Borgnine, who looks to also be playing a cowboy but is really a notorious Satanist. Notorious Satanists were rampant in the ‘70s, so it’s really not as crazy as it sounds. Anyway, Borgnine and Shatner are soon embroiled in a pray-off. Satan vs. God, best of three. Who will win? Well, Satan takes the first decision. Luckily, a slacker-looking Tom Skerritt will soon make his entrance to save the day.

Okay, let’s cut to the chase. Back in the goode olde Pilgrim days, Borgnine was a notorious Satanist who was burned at the stake. Shatner was a member of his notorious cult and was also notoriously burned at the stake. Borgnine has been reincarnated to reunite his notorious cult, one soul at a time. He has all these souls trapped in a round, horned container full of the devil’s rain, whatever the hell that is. The souls look like little screaming people running around in a storm. Will he find bodies for all these souls before he’s stopped by Tom Skerritt? Will his career survive his transformation into a goat-man? I’ll never tell.

And what of John Travolta’s role as Danny? Well, he has no lines and wears an appliance on his face that renders him almost totally unrecognizable. For this, I’m sure he’s now very thankful. Also, I’d be remiss not to mention the participation of Anton Szandor LaVey, the high priest of the notorious Church of Satan. He served as “technical director” and has a cameo as a masked guy with a beard, which the credits refer to as “high priest.” He was quite the jet-setter back in the ‘60s and ‘70s, but it was all pretty much downhill for him after The Devil’s Rain. Coincidence? You be the judge.

I think my favorite scene of the movie is when Eddie Albert and Tom Skerritt crash the notorious Satanist chapel and discover the horned container of the devil’s rain. Eddie Albert leans down in front of it and considers the little screaming people and wisely pronounces, “Souls,” as if he sees a raining ball of souls every other day. (And who knows? Maybe he did. There’s no telling what weird goods Mr. Haney used to hawk to his “special” customers in Hooterville.) Eddie Albert obviously emerged from Green Acres a wise, wise man. As wise as Arnold the pig? Well, let’s not get carried away here.

Okay, I think that’s all that really needs to be said about The Devil’s Rain. This film filled me with a warm sense of nostalgia. But like all looks to the past, the remembrance is almost always more pleasant than the reality.