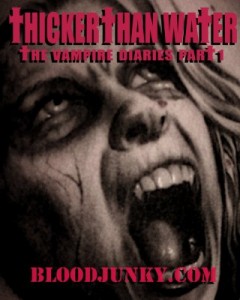 You know what they say: You can’t choose your family. I mean, like it or not, we all have one. The question is, what would you do for them? How far would you go? Would you lie? Would you steal? Would you kill? These are questions the characters in Phil Messerer’s film Thicker Than Water are forced to ask themselves. And the answers prove both unsettling and entertaining.

The Baxters are your normal dysfunctional family. An absent father, a bitter mother, a closeted son and two daughters: Helen (Devon Bailey), sunny and bright, and Lara (Eilis Cahill), dark and Goth. Helen is popular and immersed in school activities. Lara worships at the altar of Anne Rice and sits in her room all hours, umm, worshipping at her altar to Anne Rice. Unlike her sister, Lara doesn’t care for school, but she is well studied in vampire mythos, which comes in handy when Helen dies and returns as a blood-drinking creature of the night.

Helen is not really cut out for this vampire stuff. For one thing, she’s a vegetarian. Also, she has a conscience, unless she hasn’t fed for a few days. Then she’ll eat anything that bleeds. So, again, the question is, what would you do for your family? The Baxters decide to kill for theirs. Sacrifices must be made—literally. If Helen needs blood, they’ll find blood. And find blood they do. Anyone they can lure home is fair game. As the tagline says, “The family that prays together…slays together.” 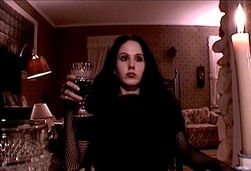 The cast is uniformly fine, but Eilis Cahill is the star of the show. Her snarky narration is always amusing, and her characterization goes much deeper than it needs to. It would be easy to play Lara as a one-note Goth, but Cahill reaches further and we are rewarded for her efforts. Devon Bailey makes Helen’s plight touching, but she can bring the scares when necessary. Bailey breaks your heart when Helen turns up at the house, confused about why she just killed the undertaker, but she’s all brutal business when she tears in to her first Mormon. (Yes, you read that correctly.) And Peter Morr’s third-act cameo as Patrice Duchamp III, a foppish Southern vampire, is a campy, fun surprise.

Phil Messerer is practically a one-person production company. He wrote, directed, produced, shot and edited Thicker Than Water. He crafts excellent dialogue for his characters—especially Lara, who is always ready with a droll aside. And he balances melodrama and comedy with horror nicely, which is tricky to pull off. The movie looks as good as it can, considering the low budget. But what Messerer lacked in dollars, he made up for in technique. Dramatically, the somewhat convoluted story isn’t told as clearly as it might be, but Messerer is a very talented stylist. The camera is always placed in an interesting spot and he uses a varied visual palette: engravings, graphics, zoetrope-like effects, atypical lenses and framing. Katherine Messerer’s art direction plays a key role in telling the tale. All the sets are well dressed and practically function as a character themselves. I especially loved watching the Baxters’ house transform from an oppressive, doily-filled dollhouse to a blood-splattered abattoir. I’m still not sure which was more disturbing. 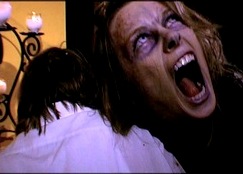 There are a couple of quite effective set pieces. A Thanksgiving celebration that is anything but celebratory is played for awkward laughs, and gets them. And Helen’s first kill starts as a hoot and ends a horror. Messerer relies a bit too much on montage throughout (note: more than one per film is lazy storytelling), and the first half hour drags a bit, but overall the flick works very well as an entertainment whose tongue is usually in its cheek.

Thicker Than Water: The Vampire Diaries Part 1 is the first part of a proposed trilogy. I hope Messerer learned enough on this project to make part two even stronger. The Baxters are a family I wouldn’t mind spending some more time with…as long as they don’t have me for dinner.*