Reyna Young—Making it up as she goes 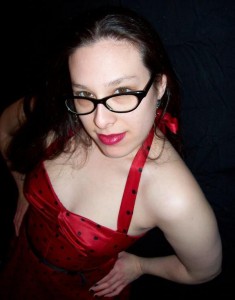 You never know what you can do until you try. And if you don’t believe it, allow me to introduce you to one Ms. Reyna Young. Once upon a time, Reyna decided she wanted to be a filmmaker, so she started a production company and she made a film. And then she made another…and another…and…well, you get the idea. I recently spoke with this brash, young newcomer about women, horror, and grand schemes and master plans.

Hi Reyna, thanks so much for taking the time out of your schedule to talk with me. You are really making a splash in the horror community, yet you’re still fairly new to it. Tell us a little about yourself and your company, Last Doorway Productions.

Well, I’m 25 years old. I have always been into horror ever since I was a little girl. I saw John Carpenter’s Halloween and fell in love with being scared. I’ve always wrote short horror stories and dark poetry. I read a lot of Edgar Allan Poe. I love that man (laughs).

I started Last Doorway Productions about two years ago. Wanting to get into horror filmmaking, knowing it was what I really wanted to do, I decided to start my own little company. I then started to film my short stories and make them a reality. I had so much fun shooting my first film, Uninvited, back in 2004 that I wanted to keep at it. I never went to film school; I bought books, studied movies and went with my instinct on things. Ever since then, it’s been a frustrating yet rewarding experience.

So far I have eight shorts under my belt, an online show called The Last Doorway and a short horror film festival I throw every year in San Francisco called “A Nightmare To Remember.” I’ve done modeling for websites and American Dream Records. I’ve also self published a book of my poetry and cannot wait to start filming my feature film soon. 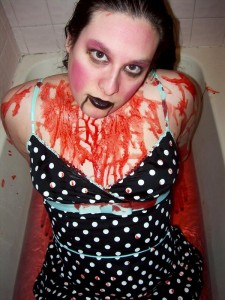 Wow, you make me feel like a slacker! What’s involved in starting your own company? Did you just dive in and figure it out as you went?

Yes, I did! I didn’t know what to do, so I just went with my instinct on things. I started a website and took a bunch of pics, threw up bios and got my friends to help out. It was great, but hard. Sure, I didn’t know what to do, but I did what I thought was right. The only way to get my movies and my name out there was to start my own little company, and it is expanding great―to a point where I have been hiring interns actually. Last Doorway Productions was named after my dream television show―to be just like The Twilight Zone, but called The Last Doorway, and show a bunch of short stories written by me. I’m still thinking of doing a couple episodes like that! Dressing up like Rod Serling and having some fun with it (laughs)!

One hard thing, though, was really trying to get people to look at someone they never heard of. It’s been two years since I first started and I still cannot believe I have achieved so much. It’s still hard, but it is fun. I put a lot of my blood and sweat into this company, and so far I must say results have been good.

It’s definitely paying off. Let’s talk a little more specifically about some of your work. What exactly is The Last Doorway Show?

Well, it’s a show I started to help out the independent filmmaker. I wanted independent horror filmmakers, photographers, models, bands to have a place to turn to when they had up-and-coming projects that they needed exposure on. Soon, after a couple of episodes, I started doing interviews with celebrities in the horror genre at the horror conventions I go to. From there, as more and more people watched the show, it began to have a life of its own. We started to get in short films, and we were being contacted every day to help someone out. It’s been fun. We’ve had a lot of publicity and good feedback. We started out just having the 30 minute show on MySpace TV under the Last Doorway Show page, and now it has its own website―24 episodes later, we are still going strong and still growing as a show [and] hopefully one day we’ll be on television like Creature Features. But the internet is growing, so I’m staying on here for now as opposed to going on cable access channel. Plus, on the web, I have much more freedom to advertise and do whatever I want as [opposed] to being on [an] access channel and being limited to no advertising, etc. 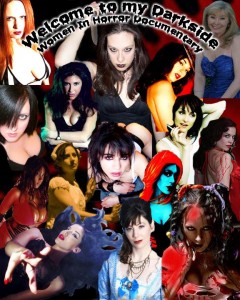 Sounds like you got it all figured out. And now, I’d say you’ve successfully graduated to the next step: a feature-length documentary film. Tell us about Welcome to My Darkside!

Welcome to My Darkside! is about searching into the depths of women in the horror genre―from scream queens to independent filmmakers. Find out what females are all about when it comes to blood, guts and boobs! This documentary explores women’s thoughts on the horror industry being male-dominated and gets into the core of bloodthirsty, sick and twisted minds of women who love to create images of the grotesque. What I wanted to do was not just show original scream queens and actresses we’ve known through the years. I want to let everyone know who our future in the horror genre is. These talented ladies, including Elske McCain, Bianca Barnet and Priscilla Ozuna, are all very much in love with the genre and dedicated to scaring others. I want everyone to know who they are and what they are all about. Women have a lot to offer in this genre. I interview not just scream queens, but photographers, journalists, special effects, filmmakers and so on. I hope everyone will enjoy it once it’s out!

Logistically, that sounds like quite a daunting task. How did you decide who you’d speak with?

I’ve met a lot of great females in horror and wanted to help them get their name out there more, and I feel I have that chance with this documentary. I targeted not just scream queens, but also horror hosts, directors, photographers, journalists―all pertaining to horror. So I started to contact anyone I knew in the genre, which is a lot of girls. So far, I have about 30 girls and counting. It’s taken on a life of its own, I tell you.

Was it difficult to gather all the interviews?

No, not really. I’m having all the wonderful females record themselves answering my questions. I wanted to give them the chance to be creative with it and the background and have freedom to have fun with answering my questions. I want a different look to this documentary, just because I feel documentaries can always be some what boring or tiring to watch. I want this to be unique, as I always want anything I do to look―different!

How long have you been working on it?

I’ve always had it in my head, but didn’t know how to start. When I did finally begin, it was a huge relief because I felt I was finally getting something done that has been stuck in my head forever. It’s something I’ve been thinking about for the past year actually. 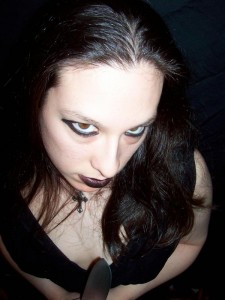 Your documentary is exceedingly well-timed. There are more female horror creators than ever before―writers, directors, actresses, producers. Why do you think that is? Why now?

I believe that women have been around for a long time doing horror underground. The more and more women who come forward in what they are doing, the more other women see it’s all right and they start coming out more. I think now is the time because the genre hasn’t seen so many women before―they are starting to come out of their shells and really show what the genre is made of. I did a lot of searching to find females in the genre, some of them I never even knew were doing it. I want to help bring them out, and more women like them. I feel this documentary will help bring forth even more women in the genre. At least that’s what I hope for!

So tell me, Reyna, where do you see yourself in five years? Do you have a grand scheme or master plan? Or are you just making it up as you go along?

Well I am, as of right now, just making it up as I go along. There’s so much I want to do and accomplish in this genre, but as of last year I told myself I would take it one step at a time. I would love to act in some movies. But I always make sure I focus on me and my stuff first. In five years, though, I see myself rich and famous (laughs). At least I hope! That’s what I am going for.

Something tells me you’ll get there yet…

This article was posted in Interviews and tagged documentary, Edgar Allan Poe, Elske McCain, Halloween, horror, Interviews, John Carpenter, Last Doorway Productions, Reyna Young, Slammed & Damned, The Twilight Zone, Theron Neel, Welcome to My Darkside!. Bookmark the permalink. Follow comments with the RSS feed for this post.Trackbacks are closed, but you can Post a Comment.