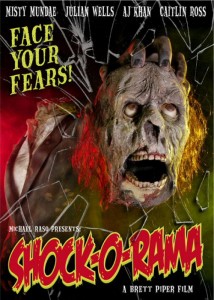 Shock-O-Rama, the 2005 offering from one-man moviemaking machine Brett Piper and actress Misty Mundae, is practically an amalgam of all that Alternative Cinema releases. An anthology-style horror movie, the experience of watching Shock-O-Rama is comparable to being at a triple-feature drive-in movie. First up is a zombie film, followed by an alien invaders movie, with a schlocky mad scientist flick closing out the evening. All that’s missing is the popcorn and heavy petting.

The first segment, “Zombie This,” stars the wonderful Misty Mundae as a B-movie scream queen named Rebecca Raven. Showbiz has not been kind to Misty—I mean Rebecca. A career of bad scripts, no respect and even less pay has ground away her soul. Facing an existential crisis, she decides to demand better-quality material from her sleazy studio chief (Michael Thomas), and he summarily fires her. This turn of events inspires Misty—I mean Rebecca—to take a break and do a bit of soul searching at an isolated, rustic inn that, coincidentally, is just like something out of one of her many scary movies. Misty Mundae is tremendously entertaining as Rebecca, and she makes the most of her time onscreen. I’m sure this role hit extremely close to home for Misty Mundae, who has since started using the name Erin Brown and has done great work in more serious fare, such as In the Wall. 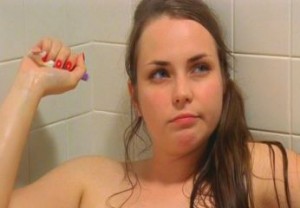 Back to the movie: While Misty—I mean Rebecca—tries to find some inner peace, her boss is busy trying to find a new star for his next low-budget epic. His assistant suggests he watch a movie that features a starlet with potential, and this takes us into Shock-O-Rama’s next segment, “Mecharachnia.”

“Mecharachnia” is a weirdly ambitious mix of screwball comedy and science fiction, kind of like My Man Godfrey meets Transformers. Rob Monkiewicz and Linda Callahan play ex-lovers defending themselves against an angry little alien who has crash-landed on Earth. This segment features some impressive stop-motion effects and is a lot of old-fashioned fun. While “Mecharachnia” ends rather suddenly, that’s okay because it brings us back to Misty Mundae.

Meanwhile, back at the inn, Misty’s—I mean Rebecca’s—soul searching pays off, in ways unexpected. Wouldn’t you know poor Misty/Rebecca accidentally resurrects the zombie of a notorious local Satanist (every neighborhood has one). I won’t spoil the end of this tale, but I will give you a hint: it involves a bathtub, blood and a chainsaw. 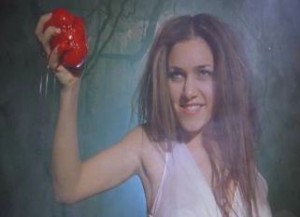 The last segment of Shock-O-Rama, titled “Lonely Are the Brain,” is another interesting mashup of genres. Let’s see, there’s bitchy sorority girls, unethical medical experiments by a hot female doctor (Julian Wells) and, of course, a talking brain—with a face, no less—that is the living embodiment of the whole of humanity and has come back from the future to, uh…well, I don’t know what exactly but, c’mon, it’s a brain with a face!  All you really need to know is that there are naked, flesh-eating, lesbian coeds whose beating hearts are being ripped from their bodies…or something.

With Shock-O-Rama, Brett Piper and E.I. Independent Cinema have delivered a smart, fun popcorn flick for cult film lovers, with more than a little tongue shoved in its gratuitous cheek. Oh, did I mention it stars Misty Mundae?