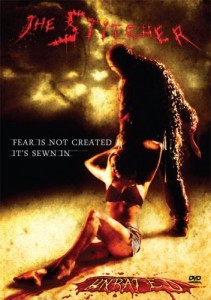 Freddy, Jason, Leatherface—move over, there’s a new crazed killer in town.  His name is The Stitcher and he knows how to get the job done, as do writer/director Darla Enlow and Next Monkey Horror Films, the team responsible for this new name in murder.

A gang of old friends has gathered in a rural, out-of-the-way lake house to reconnect over a booze-soaked weekend.  Everyone is having fun and getting reacquainted. And then people start turning up dead.  Nothing spoils a party like a mass murderer, am I right?  It doesn’t give away too much to tell you that the killer is named the Stitcher or that he has quite an original back story, which I’ll leave you to discover for yourself.  I can say that this movie’s villain is inspired by a real-life homicidal maniac, and that’s always cool.  I can also tell you that I thoroughly enjoyed The Stitcher.  True, it doesn’t have the most original setup, but it’s a plot that has worked numerous times before in other movies, and it works here too. 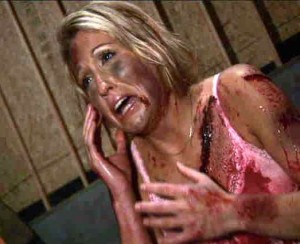 You can credit Enlow and her actors for this film’s success.  Often, in today’s glut of low-budget, digital video horror, a film is lacking in some area.  Acting, script, sound, direction, score—there’s a hundred places a film can (and usually does) go wrong.  I’m happy to say that The Stitcher sidesteps most of these potential problems.  Granted, it could use a little tightening up near the end but, hey, so could I. Also, I’d like to have seen a little more blood and gore, but I say that about everything. (“Citizen Kane? Yeah, it was pretty good, but it could’ve used a little more blood and gore.”)

The Stitcher has one of the strongest ensembles of unknown actors I’ve seen in an independent horror flick.  Scott Gaffen, Carmen Garrison, Laurel Williamson, Heather Surdukan, Justin Boyd—all the performers are good, but there is particularly strong work here from the lovely ladies of the cast.  Perhaps that’s not surprising, considering Next Monkey Horror Films is a female-driven production company.  Based in Oklahoma, Next Monkey consists of two women: Darla Enlow and Dana Pike.  These two girls do it all—write, act, produce, direct, wardrobe, craft services, effects. You name it, they handle it, and they handle it well. 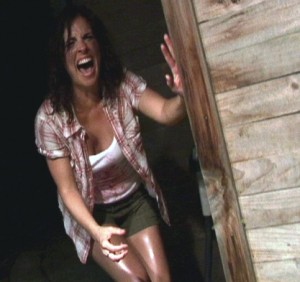 Enlow has really grown as director over the course of her career.  Starting as a model/actress, it wasn’t long before she decided to take control and get behind the camera.  Her shot choices in The Stitcher are fairly sophisticated, without being obnoxious.  The pre-credit sequence features some slick camera moves and is tightly edited to effectively ratchet up the tension.  Though the lighting is a bit dark at times, the film features great sound and a cool score of original songs.  And Ms. Pike contributes some nice effects and costume work and even manages to steal a scene in her cameo.

So far, Next Monkey Horror Films has made three features and one short film, and Enlow and Pike are beginning to get quite a bit of attention for their efforts.  And their films are not only scary, they’re educational too.  In fact, I learned a few useful things from The Stitcher. First, never leave your keys in the car (especially when stuck in a small, rural town being terrorized by a psycho killer covered in buttons).  Second, buttons are a lot scarier, and more versatile, than I once thought (especially when they are sewn into the flesh of a psycho killer terrorizing a small, rural town). And third, Next Monkey is a force to be reckoned with in the world of independent horror. I think you’ll be hearing more about them in the near future.

This article was posted in Reviews and tagged blood, Citizen Kane, Dana Pike, Darla Enlow, gore, horror, maniac, murder, Next Monkey Horror Films, psycho killer, Reviews, Slammed & Damned, The Stitcher, Theron Neel. Bookmark the permalink. Follow comments with the RSS feed for this post.Trackbacks are closed, but you can Post a Comment.