The Wrath of Kirk — Star Trek: Into Darkness 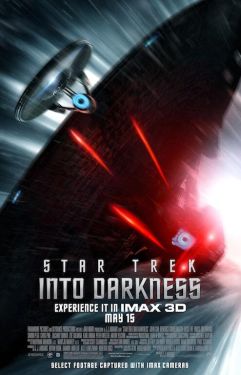 Star Trek: Into Darkness might just be the perfect summer blockbuster. (Yes, I know it’s still spring, but my thesis stands.) It’s big, it’s loud, it’s well crafted, it’s immensely entertaining and quite clever (or, more important, feels clever in the moment). What else could you want from a major Hollywood popcorn flick?

Better yet, it’s also a great Star Trek movie. Director J. J. Abrams, with the help of his writers, the Nerd Herd (genre specialists Roberto Orci, Alex Kurtzman and Damon Lindelof), has crafted a worthy sequel to his 2009 reboot of the franchise. To me, as an origin story that flick felt a little too orchestrated. But Into Darkness kicks off with an explosive setpiece that feels like something right out of the original 1960′s TV show. And perhaps that’s why Star Trek: Into Darkness is even better that its predecessor. It’s not only a cool flick; it’s everything a Star Trek geek could want.

While the USS Enterprise is on an assignment to observe a primitive civilization, Captain James T. Kirk (Chris Pine) violates the Prime Directive to save Spock’s life (that’s so Kirk). Of course, Spock (Zachary Quinto) then writes a mission report that details Kirk’s wrongful actions (that’s so Spock), which leads to Admiral Christopher Pike (Bruce Greenwood) to reassuming command of the Enterprise and demoting Kirk to First Officer (that’s so Star Trek). 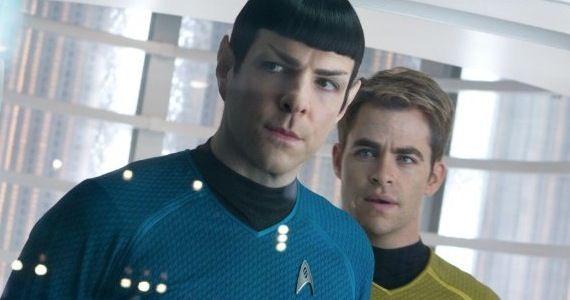 Meanwhile, it’s learned that a former Starfleet undercover agent, John Harrison (Benedict Cumberbatch), has engineered the bombing of Starfleet Command. When Pike and Kirk attend a meeting called by Admiral Alexander Marcus (Peter Weller), Pike is killed when Harrison attacks in a manner that recalls Blue Thunder. This leads to Marcus giving Kirk back his command for a mission of vengeance. Marcus then outfits the Enterprise with new mega-super-secret photon torpedoes to be used to annihilate Harrison, whom we soon learn is a man with many secrets.

There soon follows many twists and turns and crosses and double-crosses and fights and explosions and kickass setpieces galore and, befitting the film’s blockbuster status, a couple of endings. But at the heart of it all is the relationships of the characters. All the original Enterprise crewmembers get at least a few moments in the spotlight, as do a few new ones. Science Officer Dr. Carol Marcus (Alice Eve) is along for the mission…and if you’re a Trekkie, her presence is a nod to the film’s primary mystery. 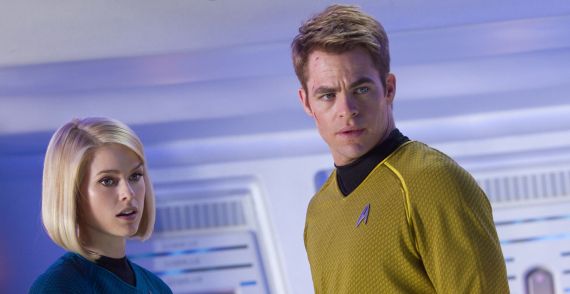 Yes, even moreso than the previous entry in the franchise, Into Darkness delights in letting the characters get back to their roots. Kirk is a horndog maverick; “Bones” McCoy (Karl Urban) is a metaphor-spouting, Spock-insulting alarmist; and Spock is a logical Vulcan who just can’t deny his human emotions. Each actor manages to bring something new to his character, while allowing clever nods to the original portrayal. But much credit goes to Abrams and company for writing a flick that is rooted in Star Trek mythos, yet feels completely contemporary.

An action flick is only as good as its villain, and as Harrison, Benedict Cumberbatch is excellent. Though relatively unknown in America, Cumberbatch is the star of the BBC’s much-loved Sherlock, a contemporary take on Arthur Conan Doyle’s original Sherlock Holmes stories, though his work here, as well as his role as Smaug in the next Hobbit movie, should guarantee Cumberbatch stardom fairly soon. He’s fairly mesmerizing onscreen and his voice is almost a special effect itself. 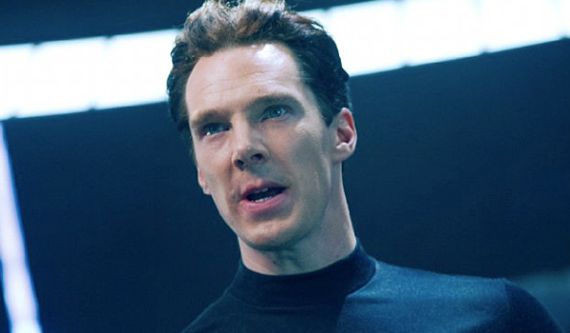 I wish Abrams hadn’t stooped to allowing the specter of terrorism to color his film. Admittedly, the feint works dramatically, but employing the present boogeyman du jour feels a bit lazy to me, a bid for topical relevance that’s not necessary.

Though the movie feels like it could lose about  15 minutes somewhere along the way (as does almost every blockbuster tent pole flick), overall Star Trek: Into Darkness is perfect big-budget entertainment for summer…or spring…or any season for that matter.