Prepare for ‘The World’s End’ 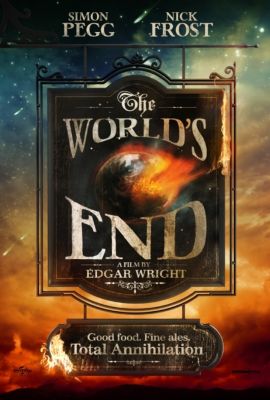 It’s a good day for comedy, because we now have a trailer for The World’s End, the new film from director Edgar Wright.

Yes, Wright and Simon Pegg are finally getting the band back together to make the final installment of the series that began with Shaun of the Dead and Hot Fuzz, known as the “Three Flavours Cornetto trilogy” because in each film, at some point one of the characters enjoys a particular flavor of Cornetto ice cream. In Shaun, it was red strawberry Cornetto, and in Hot Fuzz it was blue original Cornetto. In The World’s End, it’s green mint choc-chip, topped off with a whole lotta ale!

In The World’s End, old friends reunite after 20 years to recapture their youth by completing a pub crawl that bested them as younger men. (If you think about it, the plot somewhat echoes Wright, Pegg and Nick Frost getting together to make this film.) Of course, as often happens, all this irresponsible alcohol consumption leads to the world being undone by zombie-type creatures. (I can hear the bartender now: “You don’t have to go home, but you can’t allow the world to be conquered by the undead.”)