The New ‘Man of Steel’ Trailer Is Less Depressing…Kind Of 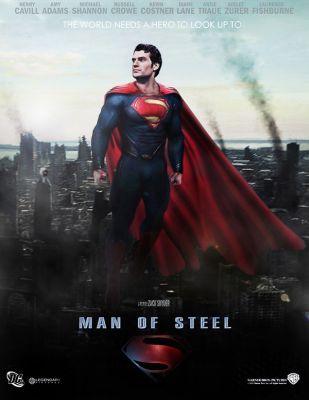 There’s a new trailer for Zach Snyder’s Superman reboot, Man of Steel, that has cast the flick in somewhat of a new light.

The past two teasers presented the upcoming Supes origin tale as, let’s face it, a boring and self-serious dramatic downer. But this new trailer shifts Man of Steel from mere bummer to mythic bummer, and that’s gotta be better…right?

We are now getting a fuller look at the story Snyder, writer David S. Goyer and producer Christopher Nolan are telling. It begins the usual way: Jor-El (Russell Crowe) sends his newborn son Kal-El to Earth to save the child. His wife worries their son will be as outcast, but Jor-El believes the child will be a god to us puny humans. Of course, being super-parents, they are both right.

After being adopted by Kevin Costner and Diane Lane, young Kal-El, now Clark Kent, is soon shunned for performing heroic acts of a herculean nature. (Obviously, we humans suck.) Clark grows up as Henry Cavill and hits the road to find himself and answer those questions burning within his being. Is he a god? Is he a man? Why did his real parents abandon him? Why did he grow that beard? It’s all so confusing for this super-orphan.

After saving more humans, he apparently realizes he can’t escape his heroic nature. Somehow, he finds the Fortress of Solitude and accepts that he must achieve his full potential and don the tights and cape that identify him as Superman.

We go on to meet General Zod, played by Michael Shannon, whose usual brand of slow-burn batshit crazy is amped up to a screaming, hysterical batshit crazy (hey, the guy’s got range). We also meet Lois Lane (Amy Adams), who is interviewing a detained Superman about being Superman and actually coins the name Superman.

What we don’t see are any scenes of Superman as reporter Clark Kent. In fact, the trailer makes it seem like that’s not even part of the story. But it has to be, doesn’t it? Eh, who knows. Perhaps that doesn’t fit the mythic tale being told. We’ll find out on June 14, when this summer blockbuster hits the screens and likely earns mythic amounts of cash — Man of Steel? It should be called Man of Sure-to-Make-a-Mint. Yeah, I know, too on-the-nose.