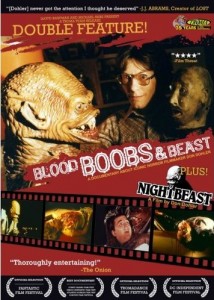 Though you’ve probably never heard of him, Don Dohler is well known to a small but passionate cult of genre fans. As a B-movie auteur, producing and directing science fiction and horror films, he was a respected craftsman whose early career mirrored, and fed, the home video revolution. And though none of his work is what one might classify as great, all of it is highly personal. Dohler, who died in 2006, was a remarkable man—that rare director who turned his back on Hollywood, satisfied to be making his films his way.

Dohler’s life and career have been lovingly documented in the recent film Blood, Boobs & Beast. Director John Paul Kinhart has assembled a fairly straight-ahead documentary, mixing insightful interviews (with J.J. Abrams and Tom Savini, among others), clips of his subject’s work and newer footage shot during the filming of Dead Hunt, Dohler’s last movie.

Donald Dohler was born in Maryland in 1946. Like so many others, he was inspired by Forry Ackerman’s magazine, Famous Monsters of Filmland. As a child, Dohler began making home movies and drawing comics, eventually becoming part of the burgeoning ‘60s underground comix scene with cohorts R. Crumb and Art Spiegelman. He went on to create and self-publish a special effects magazine, Cinemagic. All of this would prove to be the perfect background for Dohler’s eventual career as a filmmaker.

At the age of 30, following a harrowing personal experience, Dohler decided it was time to do what he had always wanted: make a movie. With a budget of just a few thousand dollars and a cast and crew of beginners, The Alien Factor was completed in 1977, but Dohler couldn’t find distribution. Sci-fi was dead. Luckily, a little film called Star Wars (you might’ve heard of it) came along at the same time and changed that. The Star Wars phenomenon allowed Dohler to sell his film to television and make enough money for his next film, Fiend (aka Deadly Neighbor).

He made a few more films in a similar manner. After finishing Blood Massacre, often considered his best work, Dohler walked away from filmmaking for more than a decade. He’d become tired of the constant hassle of the low-budget work that frequently kept him too busy to be with his family, who he often cast in his films as a way of keeping them near. But movies were in Dohler’s blood and he eventually formed a new production company with a partner, Joe Ripple.

Dohler’s death from cancer is handled quite sensitively. The cameras were rolling during his final days, and he’s shown wrapping up his affairs. This makes for an incredibly moving finale. He was very straight-forward about his illness. No tears, all business. His main concern was making sure his family was taken care of. As I stated earlier, he was a remarkable man.

Dohler wasn’t the stereotypical Hollywood player. He was a man who loved his family first and movies second—that’s the way it should be, but often isn’t—and this film is a fitting tribute. Whether you already love Don Dohler’s work or you’ve never heard of him, see Blood, Boobs & Beast. You’ll be better for it.