Steven Soderbergh Goes ‘Behind the Candelabra’ 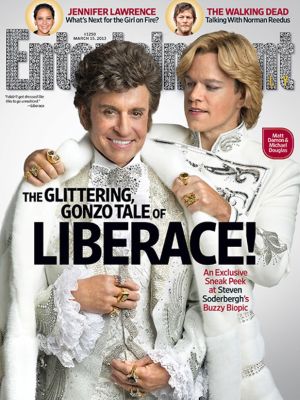 For those too young to remember, once upon a time in a magical land known as “the Fifties,” there lived a pianist known as Liberace.

Liberace was quite a popular entertainer, especially with the ladies, which was odd because he was often referred to in hushed tones as “flamboyant.” That was code for, well, you know.

Anyway, time passed and Liberace went on to become the toast of Las Vegas, playing watered down classical compositions and cheesy pop songs on increasingly ornate pianos, wearing increasingly outrageous costumes — the Elton John of Schmaltz, if you will.

Yes, Liberace was rich and famous, and all was fine until 1976 when Liberace met a handsome 16-year-old kid named Scott Thorson. Liberace was so entranced with Scott that he hired the young man to be his chauffeur and full-time “companion.” He did nothing to hide his fondness for his young protégé and even flaunted their relationship to some degree.

Now, rumors had been swirling about Liberace’s proclivities since the Fifties, but now the allegations were hard to deny. Liberace was becoming somewhat unhinged due to drug abuse and personal demons, and Scott was growing tired of his status as a kept man. In 1982, Scott filed a $113 million palimony suit against his former benefactor that was soon settled out of court. Oh, it was quite the scandal.

Though it sounds as if this tale ended sadly, take solace in the fact that Liberace and Scott reconciled and became friends before Liberace died in 1987.

You’re probably wondering why I’m relating this story, especially when you could just watch Steven Soderbergh’s upcoming HBO movie, Behind the Candelabra, which is based on Scott Thorson’s book about his relationship with Liberace and airs May 26. (I know, I know. Way to bury the lede, Theron.)

Behind the Candelabra was written by Richard LaGravenese and stars Michael Douglas as Liberace and Matt Damon as Scott Thorson. Look for fun supporting turns from Dan Akroyd and Rob Lowe, whose hair is a character in itself. 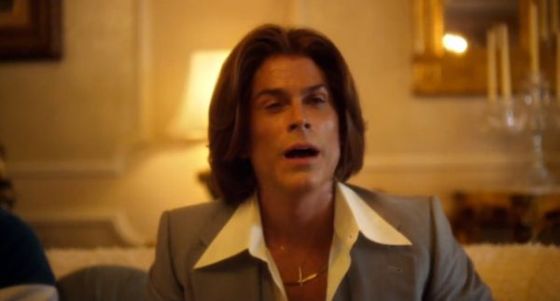 Soderbergh had originally planned on releasing the flick theatrically, but the subject matter proved too controversial (what?) and he couldn’t find financing. Luckily, HBO was not worried and now we all get to see what looks like a very entertaining movie.

Check out the trailer for Behind the Candelabra and revel in the period detail and hairstyles, the flashy sets and costumes, and Douglas’ juicy performance as the Elton John of Schmaltz: Liberace.