Cap Is Back in Action 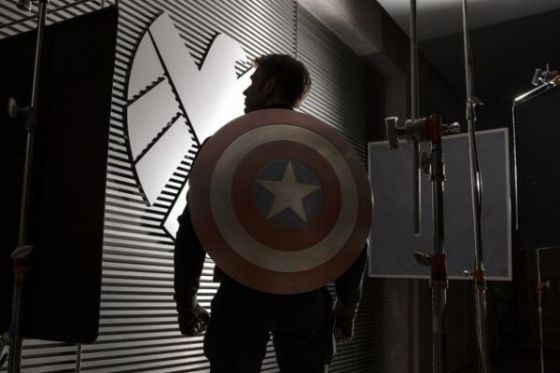 Granted, it’s not the most thrilling shot in the world. But, hey, Marvel also released a synopsis! It seems this time out, Cap will “battle a powerful yet shadowy enemy in present-day Washington, DC.” Okay, not the most thrilling synopsis either. (Ed. – Marvel, baby, this is supposed to be an action-packed thrillride. Give us something, for chrissake!)

Joining Cap on his hopefully action-packed battle will be Robert Redford as Agent Alexander Pierce, a former pretty boy operative who has matured into a distinguished senior leader of S.H.I.E.L.D.; Sebastian Stan as sidekick Bucky Barnes (aka the Winter Soldier); Samuel L. Jackson as badass one-eyed Nick Fury; Cobie Smulders as badass two-eyed Agent Maria Hill; Anthony Mackie as Sam Wilson (aka the Falcon); and Scarlett Johansson as Natasha Romanov (aka the Black Widow). Emily VanCamp will be playing Agent 13, an agent who is reportedly the love interest of Steve Rogers. Does her unlucky number telegraph misery for Cap?

Anthony and Joe Russo (Welcome to Collinwood and tons of good TV) are directing the flick based on a screenplay by Christopher Markus and Stephen McFeely, who wrote the first Cap flick as well as the upcoming Thor sequel.

As it stands now, Captain America: The Winter Soldier is set to be released on April 4, 2014, so that gives Marvel Studios a whole year to make with some more exciting still photos. C’mon, Marvel, would it kill you to give us a pic of Cap…oh, I dunno, running?