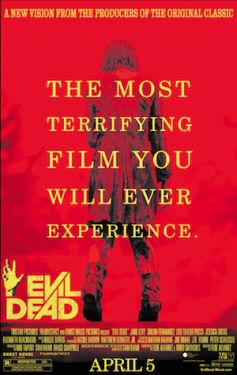 Can you believe The Evil Dead is more than 30 years old?

When I first heard about plans to remake Sam Raimi’s low-budget horror classic, I was unconvinced about the need for a new version. I mean, with 1987′s sequel Evil Dead 2: Dead by Dawn, Raimi himself essentially remade it. What if the powers that be totally screwed this up? What if they followed the usual contemporary “remake paradigm” and gave us a kinder, gentler version of the original? The horror! Well, it appears I worried in vain. After seeing director Fede Alvarez’s Evil Dead, I have to admit that he pulled it off, and then some.

The new Evil Dead is a stylish yet grisly and unrelenting gorefest. I’d say it’s the type of horror film they don’t make anymore — but since Alvarez just made it, I can’t say that. But I can say that I’m happy (and a little surprised) Alvarez had the balls to deliver such a politically incorrect hard-R horror flick in this era of by-the-numbers, sanitized PG-13 bullshit.

I suspect the presence of the source material’s holy trilogy has more than a little to do with this flick’s success. Raimi, Robert Tapert and Bruce Campbell (the original flick’s writer/director, producer and star, respectively) hand-chose and gently but firmly guided Alavarez and his co-writer Rodo Sayagues as they retooled Raimi’s 1981 shocker into an over-the-top, hardcore blood feast that somehow manages to not feel gratuitous.

While the story is basically the same as that of the original, this Evil Dead wisely eschews Bruce Campbell’s iconic Ash and, instead, focuses on Mia (a very good Jane Levy), a drug-addicted chick who ventures to that ol’ cabin in the woods to go cold turkey. Along to provide support are estranged brother David (Shiloh Fernandez) and friends Olivia (Jessica Lucas), Natalie (Elizabeth Blackmore) and Eric (Lou Taylor Pucci). At first, this revised plotline felt a tad clunky, but as the film progressed I realized that it not only supplies all involved with a reason to be out in the middle of nowhere other than the usual teen revelry (which is a nice change from, oh, every other “cabin in the woods” flick), but it also provides lots of childhood trauma and psychic pain to mine, always invaluable in a horror flick.

Even though Ash is missing, there are plenty of nods to the original to keep diehard Evil Deadheads happy. What would an Evil Dead be without the Necronomicon and someone dumb enough to recite it aloud, or self-mutilation, or a main character being forced to kill a loved one? 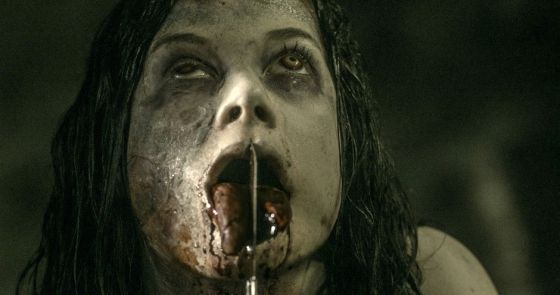 Yes, all the Evil Dead greatest hits are here, including tree rape; a raging river that prevents escape; low, fast-moving POV shots of approaching demons; and a cameo by “The Classic,” Raimi’s 1973 Oldsmobile Delta 88 (which has appeared in every Raimi flick except his western, The Quick and the Dead, though rumor has it The Classic was used as the chassis of a wagon in one scene). And, word to the wise, stick around until after the credits for a quick appearance by a certain “groovy” someone.

As I mentioned, Alvarez’s Evil Dead is a brutal, bloody affair. This is about as hard as an R rating gets in today’s cinema, so if you enjoy seeing grue fly as chainsaws tear into people, this is your flick. Fortunately, Alvarez used practical effects almost entirely, wisely believing that CGI can make things pretty, but it never truly scares anyone — wiser words have rarely been spoken in Hollywoodland. 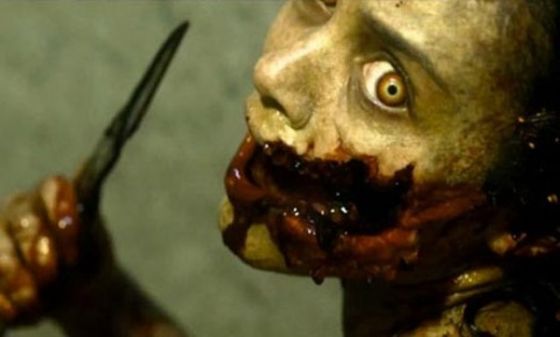 So, while I originally thought we didn’t need a new Evil Dead, I’ve now changed my mind. New horrors for a new generation, right? Fede Alvarez has given us a film that pays homage to the past but still manages to feel fresh. If you have to remake a horror film, this is the way to do it.