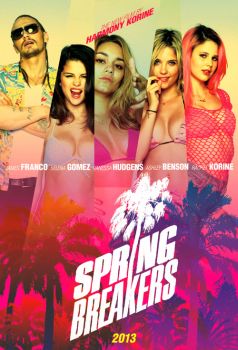 Love him or hate him, Korine is one of those filmmakers everyone has an opinion about. Is he a visionary genius? An overrated hack? Whatever he is, one thing is certain: His movies arouse such polarizing opinions because they are typically pretty odd. And his latest flick, Spring Breakers, might just be the oddest so far due to the fact that it’s so, well, normal.

The former cinematic brat is now a 40-year-old man, and much like his mentor, Larry Clark, he’s still turning out flicks about troubled young people. But the kids of Spring Breakers have much more ordinary problems than the characters who populated Gummo and Julien Donkey-Boy. In fact, Spring Breakers is likely the most conventional project he’s been involved in since he wrote Clark’s Kids, the film that launched Korine’s career.

With Spring Breakers, what Korine has delivered is essentially a 21st Century Where the Boys Are. Four co-eds (Ashley Benson, Rachel Korine and former Disney stars Vanessa Hudgens and Selena Gomez) rob a convenience store and use the proceeds to head down to Florida for spring break. When they arrive, they dive into the deep end of every hedonistic pleasure a pretty young girl can find. Then, they get arrested for it. But they go from the frying pan to the muthafuckin’ fire when they fall under the spell of Alien, a local gangsta/drug dealer/rapscallion, who bails them out.

Of course, things go downhill from there. Yet the film’s target audience might well think they don’t. Even if people die and learn hard lessons, this is a flick full of day-glo bikinis, fast cars, cool cribs, sex, automatic weapons, drugs and drinking, all set to a screaming EDM soundtrack. Hey, what’s not to like? But when all is said and done, Spring Breakers is just a simple cautionary tale filtered through Korine’s particular sensibilities. But this time, those sensibilities have been refined. 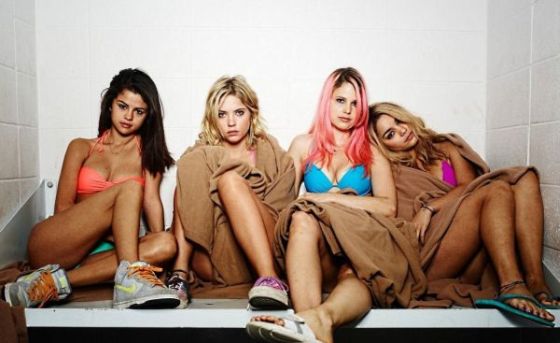 Gone are most of the filmmaker’s eccentricities, the raw nonlinear flourishes and impressionistic leanings. No, Spring Breakers is, dare I say, a slick, professional film. We still get a few filmmaking quirks, such as miniature visual tone poems and shot repetitions, but maybe this relative simplicity is a sign of Korine’s artistic maturity.

One thing is inarguable: Korine has assembled a great cast. James Franco’s hammy turn as Alien is the film’s highlight. Bedecked with cornrows, a gold grill and an exaggerated drawl, Franco is almost unrecognizable. And Korine has given him some memorable, quotable soliloquies. (I guarantee you’ll be hearing the “Look at my shit!” bit for years to come.) 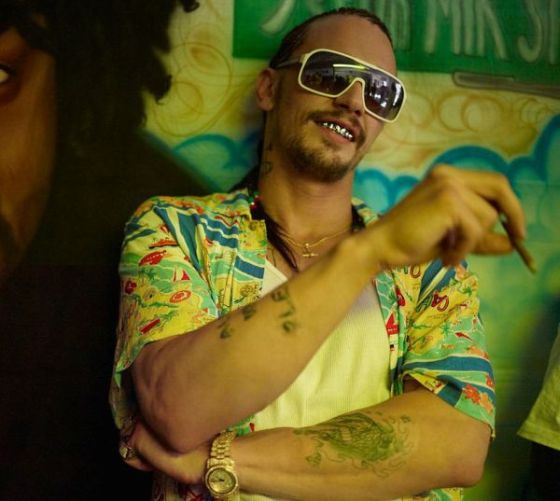 The shrewd casting of Gomez and Hudgens has drawn plenty of attention. Hudgens stepped away from the Disney brand with her appearance in Sucker Punch a couple of years ago, but this is Gomez’s first grown-up role. And she’s cleverly chosen the perfect movie with which to step out of her child-star box; As the film’s “good girl,” Gomez gets to keep most of her image intact while basking in whatever controversy the film will garner.

It’s true that Korine has never made a movie like Spring Breakers before, and only time will tell if it’s an anomaly. After seeing this flick, I imagine some are going to accuse Korine of selling out. But I’m not sure that’s correct. All of his previous films have been more about style than substance, and this one is no different. It’s just that the style of Spring Breakers is more stylish. Only you can decide if that’s a bad thing. But, man, that James Franco is a hoot!