One of the hits of this year’s Sundance Film Fest was The Spectacular Now, a small coming-of-age flick directed by James Ponsoldt. However, after seeing it at SXSW, I have to say it’s almost insulting to label such a sharp, perceptive film as a “coming-of-age flick.” 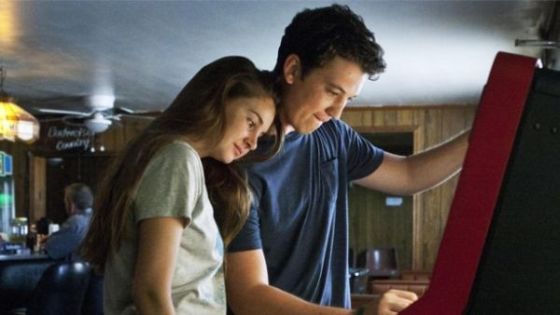 Based on a novel by Tim Tharp, The Spectacular Now focuses on Sutter Keely (played wonderfully by Miles Teller), a smart, charismatic high school senior whose only future plans involve drinking and partying. While Sutter is beloved by almost everyone, he’s also somewhat pitied because of his underachieving ways. As the movie opens, Sutter is dumped by his long-time girlfriend Cassidy (Brie Larson). It seems she wants a future and realizes that Sutter doesn’t.  Of course, Sutter reacts to this by going on a bender and passing out on a stranger’s lawn, where he’s found the next morning by Aimee Finicky (Shailene Woodley).

Aimee is a mousy classmate whose personality is the polar opposite of Miles’. She’s studious, quiet, unpopular. But the one thing they do share is a painful home life. Aimee’s mom doesn’t want her to away to college and build a life for herself, and when Miles was a young boy, his father abandoned the family. Now, his mom won’t allow him to contact his dad. Superficially, Miles and Aimee seem to be very different people, but they come to realize they’re more similar than people think, and a bond is formed.

Then, Miles starts to woo Aimee, almost by accident. Being charming is what he does, and Aimee could use a little charming in her life. Although she’s warned by her friends that Miles is trouble, Aimee warms to the attention from such a popular boy. Before he knows it, Miles has real feelings for Aimee. Soon, he must decide between drifting along amiably, living moment-to-moment in what he calls the “Spectacular Now,” or getting serious and giving Aimee a future, even if it means breaking her heart.

It should be no surprise that director James Ponsoldt has delivered another first-rate film. His previous feature, Smashed (another sharp, perceptive film), won the U.S. Dramatic Special Jury Prize for Excellence in Independent Film Producing at last year’s Sundance. Ponsoldt’s flicks have a very naturalistic feel. Favoring long takes over flashy editing, he allows his actors the freedom to give small, realistic performances and his camera seems to capture real life.

They say half of making a movie is casting, so maybe Ponsoldt’s true secret is choosing such fantastic performers. I’d never seen Miles Teller before, but he gives an amazing, mature performance as Sutter Keely. Teller hits all the right notes as an emotionally scarred adolescent who slowly realizes that, whether or not he’s ready for it, life is coming for him and he better start dealing with it. And Shailene Woodley’s Aimee Finicky is a wonderful creation. The “quiet girl who finds herself” is a cliché in high school films, but Woodley’s Aimee is full of small contradictions and changeable emotions; in other words, she’s a real person.

In teen flicks, the adults are usually colorless cutouts, but Ponsoldt is too good a filmmaker to allow that. He’s filled out his cast with superb character actors like Jennifer Jason Leigh, Kyle Chandler, Mary Elizabeth Winstead (who starred in Smashed) and Bob Odenkirk, all of whom do great work.

Whenever The Spectacular Now is discussed, John Hughes seems to come up. And, yeah, I guess that makes sense. The film is full of suburban teens who are coming of age. But it’s reductionist to label it a “John Hughes flick.” True, it is a “high school movie,” but it’s so much more than that. In fact, The Spectacular Now just might be one of the better films you see this year.