Euro-Zombie — The Lords of Salem

“What the hell, Rob Zombie?” That was the question verbalized by more than one audience member during the recent SXSW screening of The Lords of Salem, Zombie’s latest flick.

Certain artists find themselves stuck with, and perhaps weighed down by, the expectations of their fans. Rob Zombie is such an artist. After moving from music to film, Zombie found a certain success by making movies with a singular retro exploitation aesthetic and delivering them consistently enough that he created a brand. And that’s a valuable thing.

So the fact that The Lords of Salem, a somewhat abstract, glacially paced film that’s seemingly everything a “Rob Zombie” flick is not, causes a certain confusion is absolutely understandable. The audience at the screening I attended expected a trip to a 42nd Street grindhouse, but what they got felt more like a trip to Manhattan’s Angelika art house.

That’s not to say the filmmaker strayed completely from expectations. The Lords of Salem does feature cult favorites like Ken Foree, Dee Wallace, Patricia Quinn, Meg Foster and, of course, the director’s wife, Sheri Moon Zombie. There are the painstakingly designed sets, the violence, gore and nudity, as well as the lingering shot of Moon Zombie’s ass, all staples of Zombie’s flicks. But everything else about The Lords of Salem can almost be described as “Anti-Zombie.”

The film centers on Heidi Hawthorne (Sheri Moon Zombie), a DJ at a hard rock radio station where she anchors a zany show with two friends (Ken Foree and Jeff Daniel Phillips). One night, a wooden box shows up containing a vinyl LP by a mysterious band called The Lords. Whenever the album is played, Heidi trances out and has visions of a coven of witches in 1692 and the terrible events that befell them. As this is occurring, Heidi’s motherly landlord (Judy Geeson) and her sisters (Dee Wallace, Patricia Quinn) begin acting weirdly predatory and, soon, a local author (Bruce Davison) is on the case. But can he figure out what’s going on fast enough to save Heidi from a terrible supernatural end?

As I mentioned earlier, Zombie hits some familiar notes, but what makes The Lords of Salem interesting and arguably successful are the differences from his past films. As the movie starts, there’s an overall feeling of naturalism and a true camaraderie among Heidi and her co-workers that’s fairly heartwarming. As Zombie follows the DJ and her daily life, it feels more like an indie drama than the latest offering from horror’s most polarizing auteur. Moon Zombie’s work here is her most unmannered so far and indicates she has the talent to become a true character actor. 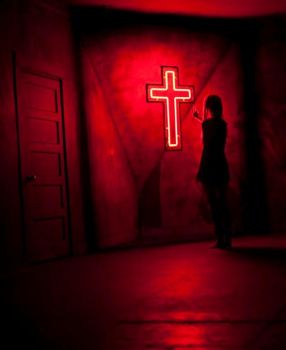 While the above synopsis seems pretty straightforward, large portions of The Lords of Salem are anything but, full of impressionistic visuals, religious iconography and dream imagery seemingly unrelated to anything. The audience is left to fend for themselves and connect the dots as best they can. It reminds me of the slow burn of Ti West’s work but, at times, also feels like a Kubrick film, full of static, wide-framed shots.

As I watched, I wondered if Zombie was trying to show he was more of an artist than his past films suggested, much like Woody Allen did with Stardust Memories. Like Allen’s fans who preferred his “earlier, funnier movies,” several of the SXSW viewers clearly preferred Zombie’s earlier, more extreme movies. One of my companions remarked she hadn’t ever seen as many SXSW walkouts as she noticed that night, and one guy seated behind us made a number of rude remarks over the course of the evening.

But I’m happy to report that the majority of the full house stayed put and seemed to appreciate what Zombie delivered. The director participated in a Q&A after the screening and mentioned that he saw The Lords of Salem as a chance to do what he wanted. He made the film for just over $1 million, which guaranteed him complete artistic freedom, and he certainly took advantage of it.

Rob Zombie’s latest flick might not be successful overall, but it definitely succeeds in showing he’s more than a mere peddler of garish, violent set pieces and sadistic redneck clowns. And that is likely more than anyone expected of The Lords of Salem.