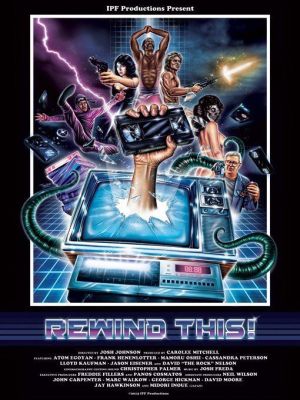 We’re living in the digital age, my friends, where media exists in a cloud and has no actual physical form. But you would never know it, based on the enthusiastic SXSW audience that packed the beautiful Paramount Theatre yesterday for the premiere of Rewind This!, a wonderful documentary on the video tape boom of the ’70s and ’80s.

Director Josh Johnson’s new doc is a loving paean to the past, a simpler time when people prowled the aisles of their local Blockbuster, marveling at big, clunky VHS clamshells covered with garish promo art that promised cheap thrills rarely delivered.

Rewind This! traces the birth, ascendance, dominance, death and rebirth of video tape through an entertaining combination of interviews and movie clips. By assembling a fascinating cross-section of academics, actors, filmmakers and fans who are in turns persuasive, cynical, droll and downright quirky, Johnson avoids the usual pitfalls of the talking-head format and gives us a thoughtful, affectionate and entertaining study of the home video revolution, as well as the culture that fostered it.

But Johnson doesn’t talk just to the eminent; he also focuses his camera on various eccentric obsessives, rental chain operators, studio heads and media mavens who wax nostalgic on the role video played in their lives and, surprisingly, what it means to the 21st Century.

Rumors of video tape’s death have been greatly exaggerated. Much like its audio cousin, vinyl, video is making a comeback among the intelligentsia and is being celebrated for many of the same reasons it was previously disparaged. Believe it or not, those soft, grainy images that used to frustrate are now being glorified.

Whether it’s a case of object fetishism or merely romanticization of a bygone era, Johnson’s documentary makes one thing very clear: Video tape meant a lot to a lot of people over the years and, if Rewind This! is to believed, it will continue to do so for years to come.