Follow the Yellow Brick Raimi — Oz the Great and Powerful 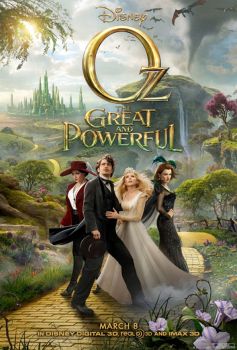 The land of Oz has been visited on screen many times since its creation in 1900 by author L. Frank Baum. But not since Judy Garland’s visit in 1939 has this fantastical realm been rendered as magically as it is in Sam Raimi’s Oz the Great and Powerful. Of course, it takes more than great CGI to make a great movie. Luckily, Raimi’s flick is filled with enough family fun and awe-inspiring visuals to bolster its pedestrian script and tonally confused performances.

Opening in a black-and-white, 4:3 ratio 1905 Kansas, Oz the Great and Powerful introduces us to Oscar “Oz” Diggs (James Franco), a hacky carnival magician prone to setting off flash pots and spouting hokey incantations like “Zim Salabim!” Oz is a bit of a scoundrel, but he’s also a dreamer. Aiding him in stripping rubes of their pennies is Frank (Zach Braff), an ineffectual nebbish who serves well as Oz’s helper and not so well as his conscience.

After being informed by his sometime sweetheart Annie (Michelle Williams) that she’s received an offer of marriage, Oz is forced to make a quick exit via hot-air balloon. As you might expect, he’s immediately caught in a tornado that deposits him in the vibrantly colored, widescreen land of Oz, where he soon meets the beautiful, beguilingly naive witch, Theodora (Mila Kunis).

When Theodora bats her big doe eyes and asks if Oz is the great wizard foretold by legend to save the people from the Wicked Witch and thereby become King of Oz, he assures her he is, but only after learning of the vast wealth the King will receive. He even promises Theodora will rule beside him as Queen…now where’s that treasure? So, they head off for the Emerald City to get the ball rolling. Along the way, they meet a friendly little talking winged monkey named Finley (voiced by Braff), who attaches himself to the group, much in the way the Scarecrow, Cowardly Lion and Tin Man attached themselves to Dorothy all those years ago.

When the gang arrives at the Emerald City, Oz meets Theodora’s older sister, the witch Evanora (Rachel Weisz), who seems doubtful of Oz’s merits and just might be the Wicked Witch he’s sworn to kill. 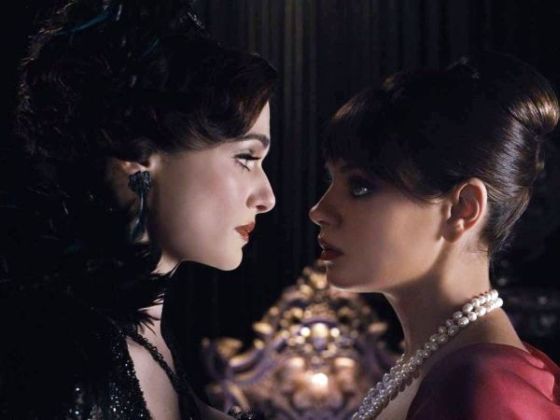 Eventually, Oz meets Glinda the Good (played by Williams), who hips him to the fact that Evanora is the true Wicked Witch. In the meantime, Evanora plays on Theodora’s naiveté and persuades her to join the dark side. But she succeeds beyond her wildest expectations, for Theodora then morphs into the dreaded green Wicked Witch of the West — yes, the same one Dorothy did battle with in 1939 — and becomes too evil for even Theodora to control.

Screenwriters David Lindsay-Abaire and Mitchell Kapner have fashioned a classic hero’s journey. Oz wants to see the world and do amazing things, and see the world he does. By movie’s end, our  rogue totally redeems himself and learns that being a good man is better than being a great man. Though there are elements of family drama here, it seems odd that Lindsay-Abaire, a Pulitzer-winning playwright, would deliver such a standard quest tale, filled with pop psychology notions like “despite what you think, you already possess all you need to succeed.” But he has, and though it all seems a bit corny, it’s perfect fodder for a family film, which is what Oz the Great and Powerful truly is. 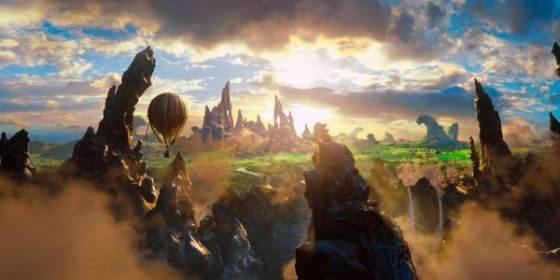 In creating his Oz for the new millennium, Raimi has made all the right directorial choices, visual and otherwise. The screen bursts with dazzling colors and hyper-detailed set design. Oz the Great and Powerful has some of the best CGI effects I’ve seen. You can absolutely see the $200 million budget up on the screen. Raimi includes as many nods to the original movie as he legally can (The Wizard of Oz  is owned by Warner Bros.), but this is definitely a Sam Raimi flick: the camera swoops and dives; fast zooms abound; Three Stooges-inspired gags appear, as do particularly intrusive vines and Bruce Campbell. Another great choice is the presence of Danny Elfman, whose score highlights the whimsical touches Raimi crafts throughout, yet accentuates the dramatic, bombastic and spooky moments inherent in any storybook movie.

The obsessive beauty of the film makes one wonder if Raimi had enough time for directing his actors. The performances are all over the map, with Weisz and Williams acquitting themselves nicely, but the rest playing their roles as broad as a barn door (especially grating is Tony Cox’s turn as a grumpy elf). As for James Franco, what can I say? Franco is forever doomed by his very Franco-ness, but he does seem especially well cast as a rascally trickster since, you know, his whole public persona is that of rascally trickster. 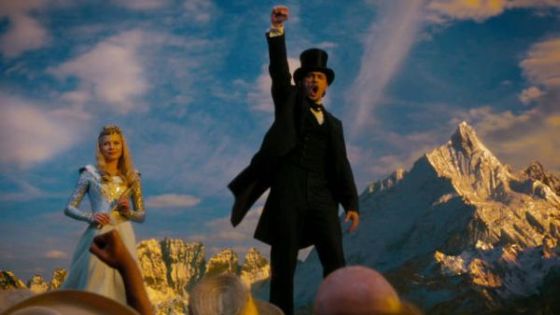 This is Raimi’s first true “family-friendly” film (if you consider the Spider-Man flicks to be comic geek/teen movies) and it does everything it’s meant to do. It entertains, amazes and, most important, sets up the sequel, which is already being planned. Hopefully, Raimi’s next visit to Oz will be a bit more even. But until then, take the kids to see Oz the Great and Powerful. There are worse ways to spend a couple of hours and if you believe — really, really believe — you might even remember what it is to be a kid yourself. Zim Salabim!!!