For those who don’t know, Camaroville is TFO Ground Zero, the location of anything and everything created by writer/director Darin Wood and his producing partners in crime, Christy Savage and Amy Slockbower.

While the cursed Camaroville has previously suffered the wrath of Cheerleaders From Hell, dealt with the Monster from Bikini Beach and gone futuristic on the Planet of the Vampire Women, this time out it’s going ’70s retro for Badass Monster Killer. And, personally, I think this is the flick TFO was born to make — think Shaft by way of H.P. Lovecraft. I ask you, how awesome is that? 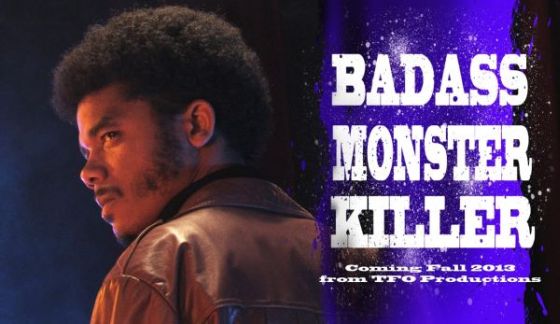 Check it out, Jack: It seems there’s a turf war going down on the bad side of Camaroville, but the new mob in town wants more than possession of the local dope and sex trade. They are also intent on resurrecting hideous demon-gods who have waited centuries for the chance to eat all our souls and enslave mankind.

Luckily, soul brother secret agent Jimmy Chevelle is on the case. This badass cat hasn’t let the Man keep him down, and he’s certainly not going to let some sinister shape-shifting suckas destroy the earth, and all of its foxy, foxy chicks.

But can jammin’ Jimmy stop the gangster cult’s evil plans in time? Get ready for a freaky, funky thrill ride with demonic pimps, kung fu super-foxes and terrible sanity-shattering extraterrestrial horrors from beyond space and time!

Principal photography on Badass Monster Killer is complete, but if you’re interested in getting involved, had over to the flick’s official IndieGoGo page, where post-production funds are being raised. Your contribution will score you some funky-fine swag as well as the pride of knowing you’re involved in making a super-swinging flick.

Now, the only question left is, are you a mere Funkateer or are you a freakin’ Funkzilla?