A Long, Strange, Long Trip — The Hobbit: An Unexpected Journey 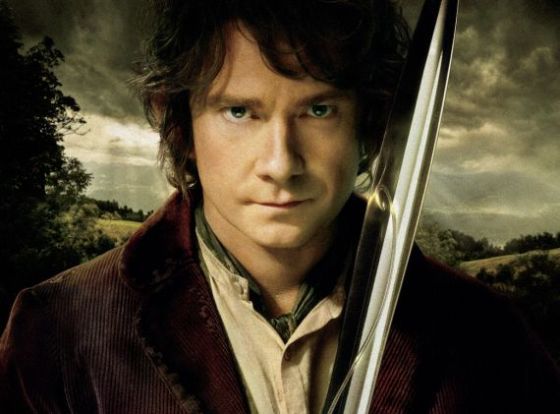 After years of stops and starts, it’s finally time to follow Peter Jackson back to Middle-earth for The Hobbit: An Unexpected Journey, the first film in his trilogy based on J.R.R. Tolkien’s beloved 1937 children’s fantasy, The Hobbit, or There and Back Again. And I hope you packed a lunch, my precious, because it’s going to be quite a lengthy excursion.

As you might have heard, a few years back Jackson turned The Hobbit‘s sequel, Tolkien’s The Lord of the Rings trilogy, into three blockbusters — which made sense. I mean, three books = three films, right? Now, Jackson has taken The Hobbit, one 300-page book, and turned it into three blockbusters. I hate to accuse Jackson of milking the cow, but The Hobbit could have easily been one 150-minute flick. But, hey, where’s the fun (and profit) in that?

I’m sure you’re curious about how Jackson and his co-writers (Fran Walsh; Philippa Boyens; and Guillermo del Toro, who was originally set to direct) transformed a quirky little quest into three epic adventures (the first of which clocks in at almost three hours), as was I. As I wrote HERE, I was once a Tolkien fiend, but that was years ago. So, before I saw Jackson’s Hobbit, I refamiliarized myself with the source material.

From what I can tell so far, Jackson and company have blown up The Hobbit by supplementing it with posthumous Tolkien writings, such as The Silmarillion, as well as adding totally new material that fits and extends  the story. This, of course, makes reviewing The Hobbit: An Unexpected Journey a bit troublesome. I won’t truly be able to tell how good of an adaptation Jackson has delivered until the trilogy’s final film comes out in 2014. But I can relate my thoughts on whether Jackson’s first entry in the series succeeds on its own merits, which is actually all that should matter.

The film begins with a bit of backstory so the uninitiated will know what’s going on. It seems the great dragon Smaug has descended upon the mountain home of the dwarves, driving them out into the wilderness and taking possession of their vast treasure.  Jackson then adds a framing device that finds the older Bilbo (Ian Holm) deciding to transcribe his past adventures for his heir, Frodo (Elijah Wood). We then move back 60 years to the beginning of Tolkien’s book.

The younger Bilbo (a pitch-perfect Martin Freeman) is perfectly content enjoying his simple, uneventful life in the Shire until Gandalf the Grey (Ian McKellan) appears and tricks him into hosting a party/planning session for a team of dwarves led by the stubborn Thorin Oakenshield (Richard Armitage). The dwarves are plotting to take back their mountain kingdom and treasure from Smaug, and Gandalf has told them Bilbo would be the perfect addition to their team. Of course they have their doubts and even Bilbo agrees with them. But soon, they are all on their way.

What follows is various and sundry (mis)adventures involving hobbits, dwarves, elves, trolls, orcs and goblins, all of which more or less follow Tolkien’s writings to various degrees. Here, Jackson has made a movie that feels somewhat like his Lord of the Rings flicks, but does possess a lighter touch befitting this particular story. And while it might not always feel of a piece, it is truly bravura filmmaking nonetheless. Jackson has broken new ground, filming The Hobbit at 48 frames per second, as opposed to the standard 24fps. This is meant to make the film look sharper, but it merely seems to make everything look brighter, as if shot on video. Images appear more artificial than intended, which does not serve well a CGI-heavy production like The Hobbit. That aside, Jackson has given us a gorgeous film. The sequences set in the Elven kingdom of Rivendell pop off the screen with an otherworldly beauty, as does Cate Blanchett, who returns as Elf queen Galadriel. Say what you will about his technical approach this time out,  Jackson knows how to make a movie.

While it’s true a 21st-century fantasy film like The Hobbit is only as good as its effects, all movies — no matter the genre — depend on the strength of their actors, and The Hobbit is filled with wonderful performances, even those rendered digitally.

All the flesh-and-blood actors on display are excellent, especially Freeman, who invests his Bilbo with a reality and low-key humor that grounds a film necessarily filled with unreality. But for my money, the highlight of The Hobbit is Andy Serkis’ performance as Gollum. With his work in King Kong, The Lord of the Rings and Rise of the Planet of the Apes, Serkis has proven himself the reigning champion of virtual performances. He cements that status here, fleshing out the character he created in Jackson’s earlier Tolkien flicks. He’s aided by improved CGI, but it’s really all about Serkis’ ability to make real an unreal creature I loved (and feared) as a child. And as an adaptation, the section of The Hobbit featuring Bilbo and Gollum’s game of riddles is as good as it gets.

If I remember my Tolkien correctly, this first Hobbit flick covers about half the original tale, so there will be more padding in the next two movies to be sure. But Jackson seems to have no problem making it all work, though it does lead to some tonal inconsistency. The invented material sometimes sits uncomfortably next to Tolkien’s story beats, but overall it flows fairly well (for a freakin’ three-hour movie). After the series is done, I’d really like to see a DVD special feature of a recut Hobbit that’s more true to Tolkien’s book. I’m sure Jackson will have enough material to make a “pure” Hobbit flick if he so chooses, and, hey, it’d be one more way to earn some cash from a finished franchise.

Jackson has once again proven himself to be a master filmmaker, one who has come a long way from his beginnings as a kiwi splatterhound. The Hobbit: An Unexpected Journey might not exactly be my Hobbit or even Tolkien’s Hobbit, but it’s not a bad Hobbit at all.

(Because I already posted the trailer in the article linked to above, I leave you with an awesome bit of ’60s Hobbit craziness courtesy of Leonard Nimoy, who proves that William Shatner wasn’t the only original Star Trek cast member to make questionable musical choices back in the day.)