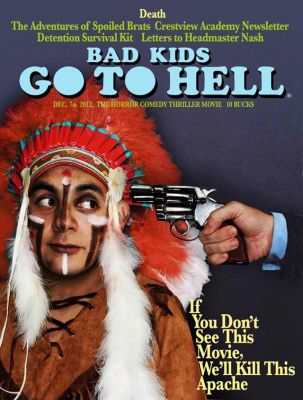 I kicked the comic book habit a while ago, so I was not acquainted with a graphic novel by Matthew Spradlin and Anthony Vargas called Bad Kids Go to Hell. But now that it’s been made into a movie, which opens today, I’ve heard of it. In fact, I’ve even located the trailer and embedded it below for you, dear reader. You know, just in case you’re as lame as I am and haven’t heard of it either.

The big screen adaptation was directed by Spradlin and written by Spradlin and Barry Wernick. Based on the trailer, it looks like a humorous cross between Poltergeist and The Breakfast Club. In fact, Judd Nelson even has a role, a bit of stunt casting that helps the whole John Hughes tie-in.

Now I have no idea how closely the film follows the comic, but let’s play a game. We’ll look at the book and movie synopses and see how closely they match. Fun, right? First, here’s Amazon.com’s book description:

“A construction crew unearths a primal, supernatural force when they break ground for a new, commemorative library for Crestview Academy, a prestigious Midwestern prep-school and home to the spoiled offspring of the city’s social elite. Three years later, six of Crestview’s richest (and hottest) students are brought together early one Saturday for detention inside the newly completed library. Bored, the kids talk about their school’s infamous ‘dark presence,’ and goad one another into a half-hearted séance. However, the joke turns deadly when they rouse an angry spirit and start to die, one-by-one, in horrible accidents! Yet, as the kids drop like flies, are the murders really the work of an evil phantom, or has one of these six spoiled brats secretly conspired to bring them all together for detention in order to ‘level’ the social playing field and do away with the competition? The Breakfast Club meets The Grudge in this sexy, dark, comedy-thriller mini-series.”

“On a stormy Saturday afternoon, six students from Crestview Academy begin to meet horrible fates as they serve out their detentions. Is a fellow student to blame, or perhaps Crestview’s alleged ghosts are behind the terrible acts?”

Hmm, it sounds like they are basically the same, give or take about 125 words. Sheesh, Amazon! Also, Amazon and I seem to agree on The Breakfast Club, but I don’t see The Grudge in the trailer. Check it out and see what you think.

Oh, and I have to give the marketing team props for the above poster, which is based on an infamous 1973 National Lampoon magazine cover. (Of course, this is not the movie’s main one-sheet, which is super-boring and generic. Hey, at least someone involved is hip.)