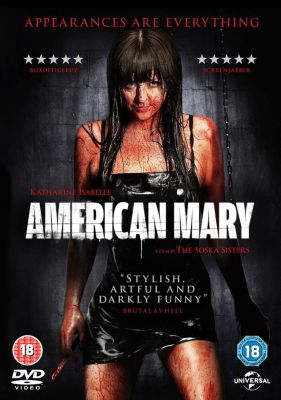 American Mary, the superb new thriller from Jen and Sylvia Soska, has finally gotten a U.S. distribution deal. And all I can say is, it’s about time.

XLrator Media has acquired the U.S. rights to the Twisted Twins’ sophomore feature, which will be released on XLrator Media’s new Screamfest label in fall 2013.

When announcing the news, XLrator Media CEO Barry Gordon said, “American Mary is one of the most original, thought-provoking and subversive horror films I’ve ever seen. It has riveted audiences at horror festivals and marks the emergence of the Twisted Twins as the most exciting genre directors to come along in years.”

Screamfest co-founder and festival director Rachel Belofsky agreed, saying, “Based on the extraordinary audience response at this year’s festival, we knew we had to have this film on our Screamfest imprint with XLrator. Jen and Sylvia Soska are incredibly talented directors. We are so thrilled to bring this film to genre fans all over the U.S.”

It’s a little surprising that it’s taken this long for a U.S. deal to be struck. American Mary, which features a bravura performance from genre vet Katharine Isabelle, made a big splash on the festival circuit, winning multiple awards. And the Canadian and European rights were snapped up months ago by Anchor Bay and Universal Pictures International, respectively. (The UK DVD hits the marketplace on January 21.) Hoping to get some insight, I got in touch with Sylvia Soska and she shed some light on the matter.

“Jen and I have been so looking forward to announcing an American distributor for American Mary,” Soska told me. “The amount of support we have had in the States has been incredible, and we had to find a company that would match that level of support in releasing the film. The Screamfest label makes sense for a festival that loves the genre so wholly and it’s very exciting to see that passion behind American Mary for her U.S. release.”

It takes time to get the right deal done right. I’m just happy that it’s finally confirmed. American Mary is an awesome flick and absolutely deserves all the attention it’s receiving.