What about ‘The Hobbit’ Trailer? 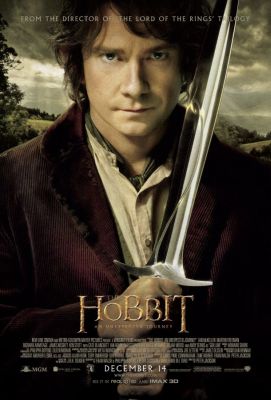 I have a confession. I was once a Tolkien fanatic. True, it was long ago and my fascination lasted only a year or two, but it felt like an elf-packed lifetime.

During grades six and seven, I pored over every scrap of J. R. R. Tolkien’s writing I could get my hands on. I would soon move on to other period-specific literary obsessions, such as Carlos Casteneda’s Don Juan series and everything Vonnegut and Heinlein had written, but for that brief moment in time I essentially lived in Middle-earth. And my favorite of all Tolkien’s books was The Hobbit, or There and Back Again.

Now, for another confession. Though at one time I believed the opening paragraph of The Hobbit to be so perfect that I committed it to memory, I now remember very little of my time in Middle-earth. (Hey, that was a long time ago.) So when I saw the trailer for Peter Jackson’s upcoming first film in The Hobbit series, I wasn’t sure what to think.

I suppose, for the most part, that’s how I feel about the trailer for The Hobbit: An Unexpected Journey. It looks a little too epic to jibe with my memories of Bilbo Baggins’ modest little adventure. But it seems less so than The Lord of the Rings, so I’m cautiously optimistic nonetheless. And, yeah, Martin Freeman is good casting for Bilbo.

Oh, and the poster up there to your right? Just so you know, my Bilbo would be holding his pipe, not a freaking sword. So, maybe not so optimistic after all. What about you?

This article was posted in Other Awesome Stuff and tagged J.R.R. Tolkien, Martin Freeman, Other Awesome Stuff, Peter Jackson, Slammed & Damned, The Hobbit or There and Back Again, The Hobbit: An Unexpected Journey, The Lord of the Rings, Theron Neel. Bookmark the permalink. Follow comments with the RSS feed for this post.Trackbacks are closed, but you can Post a Comment.