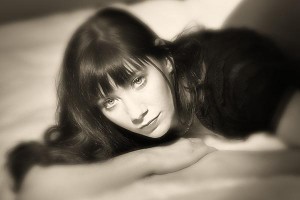 Rachel Grubb makes it look so easy. After starting out as a writer, she soon found herself modeling as well as acting in horror films. Not long after that, she moved behind the camera to direct and produce her own projects. If you’re not familiar with her work yet, don’t worry—you will be soon. Rachel recently took the time to speak with me about movies, modeling and The Chainsaw Mafia.

Hi Rachel, thanks so much for taking time out of your busy schedule to talk. And I’m not kidding when I say busy. According to IMDb, you shot 10 project in 2008 and already have five 2009 films in various stages of production. Where do you find the energy? Do you just work nonstop?

I would say yes, I do work nonstop, if I can help it. I love what I do, and I feel very fortunate that I am able to spend so much time at it. It’s not hard to find the energy to keep doing your favorite thing in the world. 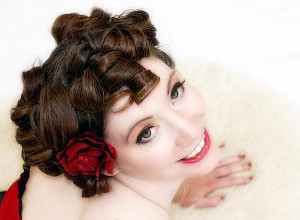 Good point. And all that does not even include your modeling work. You have some great photos out there, of all different styles. But you definitely have a retro sensibility. Where did you develop your love for all things vintage?

Before I started modeling, I’ve always been a fan of Bettie Page. She’s got such a strong presence, and always exudes class, no matter what she’s doing. I have long dark hair and bangs, which is probably why I always got so many comparisons to her. I just think the vintage pinup style is classic and beautiful. I had always wanted to send Bettie some of my photos, just to show her how much I admired her work. I never did it, mainly because I never thought my pictures were good enough. After every shoot, I’d say to myself, “Maybe the next one.” I wish I would have done it. I know my pictures will never be what hers were, but I would have liked to show her that she got me interested in modeling, and that photographers wanted to work with me because of my resemblance to her. 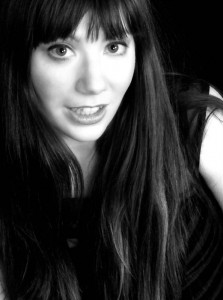 How do you find the different photographers you work with?

I find most of them on Model Mayhem. It’s a networking site for photographers, models, and stylists. More recently, I started attending a photography workshop called Strobist. A group of photographers get together one day a month and take pictures. When they need models, I show up and work with them. They provide a stylist. I’ve set up shoots with some of them outside the group as well. My friend Jason Schumacher referred me to the group.

How do you find the wonderful clothes? Do you collect clothing from various eras?

Most of the clothes I collect are Halloween costumes. I usually get them online and wear them year-round. When I dress up for Halloween, I like to wear scary costumes, but I wear the cute, girly costumes for photo shoots. I have pinup girl versions of Marie Antoinette, Alice In Wonderland and others.

That’s so great! Okay, although you’re known as an actress, you started as a writer. You kind of backed into acting, didn’t you?

Yes, I did! I was going to school for writing when I developed an interest in film. It was then that I started screenwriting. I always thought it would be fun to be an actress, but I never thought I had the talent for it. A few years later, I started taking an acting class, just for something fun to do. At that point, I considered myself a competent actor, nothing more. I certainly wasn’t bad, but I didn’t think I had a particular talent for it. But I got very good feedback from my teachers and fellow students. I started going to local auditions, just to see if I could do anything outside of class. So far, it’s worked out very well. 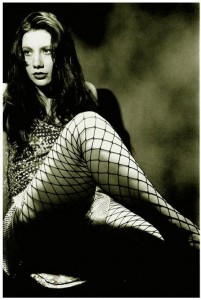 I’d say so. Do you feel like you got side-tracked? Is it ever frustrating for you?

Yeah, sometimes I do. I always thought I would be a novelist. I still love to read, and any time I’m reading a really good work of fiction, it makes me want to write one of my own. I do feel like, right now, movies are what I really need to be doing. It’s something I love and something I’m good at, and it’s going well for me so far. The screenplay for the first feature film I directed began life as a novel. Maybe I’ll try it again when I’m older and decide to take some time off.

Now you’ve got a production company and you’re directing too! This has to be an exciting time for you.

Yes, it is. Very much so. Acting, directing and having a production company are all things I never knew I could do until I tried.

Tell us a little about your production company, Silent-But-Deadly Productions.

It’s me and Brooke Lemke. You may remember Brooke from Invasion Iowa with William Shatner. We started out as actresses who worked together a lot, and we decided we wanted to keep making movies together. We started Silent-But-Deadly Productions because we wanted to create more opportunities for women in film. It’s a pretty male-dominated industry, which isn’t a bad thing, but it sometimes means that women are underrepresented. A lot of female actors are not always satisfied with the quality of roles written for women. We hope to create some interesting female characters from our perspective as women. We also love working with female crew members. They rock! 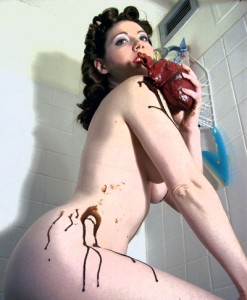 You recently produced, wrote and directed Why Am I in a Box. The trailer looks great! How was your experience on the other side of the camera? Was it overwhelming?

I was more overwhelmed before the film started than I was while I was actually working on it. I had never directed anything before, and I was nervous. But as soon as I started, I got comfortable with it. I still got stressed out when we had a time limit on a location, but other than that, I had a blast.

Did you encounter anything that you hadn’t anticipated? What surprised you about directing?

I was surprised by how easy it actually was. Well, I shouldn’t say “easy.” Directing a movie is hard work. But I was surprised to learn that I am completely capable of it. I think people often don’t know what they’re capable of until they try.

Well, as if you’re not busy enough, you’ve begun writing for the lovely Shannon Lark’s website, The Chainsaw Mafia. How did you meet Shannon?

Shannon is wonderful. I was aware of her work for a while when Michelle Fatale contacted me about being [one of the] Viscera Women. She had heard about me on Fear The Dead radio and wanted to have me on the site, since I do a lot of horror and I have my own production company. The Chainsaw Mafia celebrates women in all aspects of horror cinema, not just acting, so I was a good fit.

How did you come to write for the site?

After The Chainsaw Mafia interviewed me, I stayed in touch with Shannon. I sent her press releases about my films, and she eventually asked me if I wanted to be a staff writer. I love what The Chainsaw Mafia is doing for women in horror, so I was happy to participate.

Well, they are definitely lucky to have you. All right, let’s wrap it up with the million dollar question. There are more women creating horror entertainment than ever before. You are quite outspoken about women’s place in the industry, Rachel, and you’re somewhat of a role model. Tell me, why is now the time for women in horror? Do you think there’s been a specific confluence of events, or are women just tired of taking shit?

I don’t know why now is the time for women in horror. I only know that it is. You mostly hear about us in the underground, but I think that in the next few years, it will become a more mainstream thing. When that happens, the idea of women in horror won’t be a novelty, it will be a given.

This article was posted in Interviews and tagged Bettie Page, Halloween, Interviews, Michelle Fatale, Model Mayhem, Rachel Grubb, Shannon Lark, Silent-But-Deadly Productions, Slammed & Damned, The Chainsaw Mafia, Theron Neel, Why Am I in a Box. Bookmark the permalink. Follow comments with the RSS feed for this post.Trackbacks are closed, but you can Post a Comment.