In American Mary, the new film from Jen and Sylvia Soska, Tristan Risk proves herself to be a breakout star with her portrayal of Beatress, the bubbly voiced stripper surgically modified to look like Betty Boop. Working beneath layers of facial prosthetics, Risk uses only her soulful eyes and dancer’s body to convey a world of emotion. It’s a subtle performance that declares the arrival of a talent to be reckoned with.

Last Halloween, I gathered the Soskas’ spooky reminiscences during Mary preproduction, but this year production is finished, so I tracked down the Vancouver-based burlesque queen known as Little Miss Risk to ask about her Halloween memories. Much like the enchanting Beatress, she was amusingly direct and did not disappoint.

We’re here to talk about Halloween, Ms. Risk. Are you an All Hallows’ Eve enthusiast?

One hundred percent all the way! Every drop in my bloodstream flows for Halloween. Growing up, I was the resident “spooky chick” at school and in my circle of friends. I still am to an extent, even in my burlesque troupe, Sweet Soul Burlesque.

Do you have any special annual Halloween rituals?

Every year, when the leaves turn and snack-sized candy bars find their way into shops, I use it as an excuse to buy up home decor like a woman possessed to see me through the other eleven months of the year. I was totally the kid who used to plan her outfits months in advance, and as my birthday falls two days after Halloween — Día de los Muertos, Day of All Souls — and I come from a fairly pagan family, I couldn’t help but garner a fondness for this holiday. What other holidays can compare? St. Patrick’s Day? Pfft. No, Halloween is my favorite time of year.

I contend that when you’re a kid, Halloween is the best night of the year. Yes, Christmas runs a close second, but Halloween is like Christmas with monsters and nothing beats that. True or false?

Are you kidding? The constant threat of being “bad” hanging over your head like Damocles’ sword and looking over your shoulder for Santa, and the constant neuroticness of everyone around you? Nope. Halloween is hands-down the best night of the year. You’re encouraged to be a sneaky, spooky little juvie, to dress up in anything you want and scare the snot out of the other kids. When else are you able to have such sanctioned delinquentisims? Not often enough, I tell you. Can’t get away with that at Easter or Passover…

Actually, upon reflection, it’s no wonder why I became a raver. Despite growing up in mild Vancouver autumns, they were still not warm come Halloween,  and so my mother devised making me a tube dress in neon green with seashells glued over my non-existent breasts, green iridescent gloves and, I love this, a cape! Brilliant!

Add the makeup, which was a special combo of my jazz-dance stage makeup, and crimped hair, giving me kind of a Siouxsie afro. It was horrendous and hilarious! I actually kind of assign this to my love of over-the-top costumes and the fact that now, even as a grown woman, I am willing to pay over $1,000 to get a professionally made mermaid tail and train with a personal trainer to be the best mermaid I can be. The lesson: Go nuts making kids’ costumes or they may become cosplay deviants like myself.

I’m sure mothers everywhere thank you for this insight. Moving on, do you care to share a particularly unforgettable adult Halloween memory? We’re pretty liberal around here, so feel free to be as adult as you are comfortable with.

I’ve a few…and some I even remember whole evenings from! 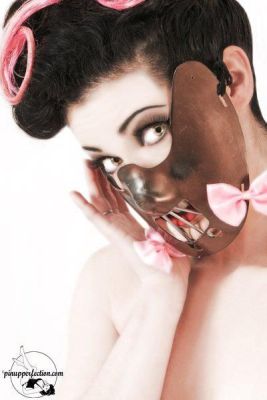 Nice! Let’s have one of those.

Being on tour when I was in my old band always sucked since it was like being away from home at Christmas, but one notable exception was in Berlin two years ago. It was a miserable tour and I kept trying to think up ways to get kicked off of it just so I could leave and go home. Halloween found us in Berlin at this bar and the 31st fell on a Sunday, so most of the people had blown their wad earlier in the weekend. I was miserable, homesick and coming down with a cold, but I saw a poster for an electronic party that had happened there a few nights before, and one of the DJs, Dickey Doo, was from Vancouver and somehow it cheered me up. I found one of the posters and took it with me as a reminder to keep me thinking good things — and that if I ever came back to Berlin, they’d be a million times better and under far greater circumstances.

A bittersweet Halloween in Berlin. How Cabaret of you! Okay, onto happier memories. Other than the day-glo tube dress mermaid, what were your favorite Halloween costumes as a kid?

I had a sick Teenage Mutant Ninja Turtles costume, Donatello. I had a Catwoman outfit from Batman Returns, and one notable black “unlucky” cat costume which had great makeup that made me feel like a member of the cast of Cats.

Wow, first Cabaret and now Cats — Broadway is trending in this interview. Weird. Okay, here’s the big one: What are your three favorite horror movies?

I like classic psychological horror too. The original Haunting and House on Haunted Hill, with Vincent Price, are incredible for their use of suggested horror. It’s the same reason I like listening to radio plays; our fertile imaginations are infinitely more terrifying that anything you can present to the eyes. 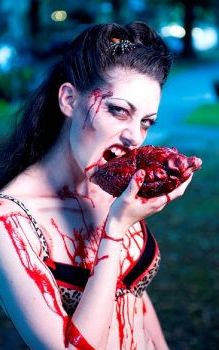 Since you mentioned fertile imaginations, how fucking awesome were you in the Soskas’ American Mary?

American Mary exceeded my expectations. I read the script three times in a row; each time, I found more layers, and it’s been like that watching the film. As part of its creation, there’s lots of subtleties and subtext that went over my head the first time I saw it, because I was so darn excited. And then every time I have seen it again, I’m picking up on little nuances. The way Katie [Isabelle] raises an eyebrow, the inflection and tone in Antonio [Cupo]‘s voice… even things I wasn’t aware I was doing, I see from another perspective and it’s great!

And you gotta love those Twisted Twins!

I love that the Soskas aren’t weird for being weird’s sake. None of this was put together with a mind of how much merch to sell at Hot Topic. It was from a fresh perspective that they fought to keep their vision of. During production, everyone had an opinion of what [American Mary] should do, how they should cut it, what it should be like — well, opinions are like assholes, aren’t they? Everyone has one.

Especially in the movie biz.

While I’m very certain people don’t wander onto Tim Burton’s or Spielberg’s sets and offer their opinion on how it “should” be done, there seemed to be quite a few people who wanted to offer their pearls of wisdom to the Soskas. It should be kept in mind that pearls are also a source of constant irritation to the oyster. Despite every hurdle they had to overcome in making Mary, Jen and Sylvie exceeded all expectations and are now being applauded for their originality. Well worth the struggle, I’d say. 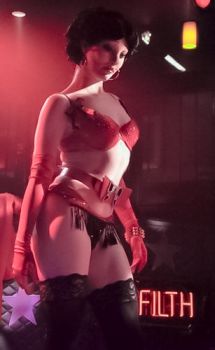 Agreed. What’s your favorite memory from the American Mary shoot?

Oh, shit…there’s lots to choose from on this one. I think one of the things that I personally got a major kick out of requires a bit of history about me. I’m a burlesque dancer. I spend a great deal of my time in a state of semi-nudisim. In fact, it’s my preferred state, as I am comfortable with my body and then I’m not troubled by things like trifling matters. Like pants, for instance.

In playing Beatress, I opted to be nude, or as nude as possible, when we were shooting the dance scenes at the Bourbon A Go Go [the strip bar in the film]. Since I’d do my numbers and we’d cut for whichever scene it was, I usually was out of clothes for most of it. One of the producers kept trying to keep me in a bathrobe, and I kept hiding it in the DJ booth. I know she had only my comfort in mind, but I’m hardly one of those shy Hollywood starlets. So, it was a source of personal amusement to keep it off and wander around nude except for a tiny, Swarovski-crystalled G-string, high heels and my FX makeup.

What a coincidence! That’s my favorite Halloween costume…