The Real Me — Vampira and Me 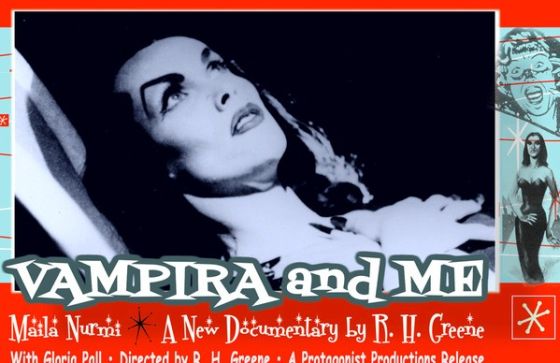 These days, a lot of people know Vampira, the acerbic 1950s proto-goth horror hostess who briefly turned popular culture on its ear in Eisenhower America. But very few know Maila Nurmi, the actress who portrayed her. Now, filmmaker R. H. Greene seeks to remedy this sad situation with his absorbing new documentary, Vampira and Me, which screened last night as part of the Austin Film Festival. 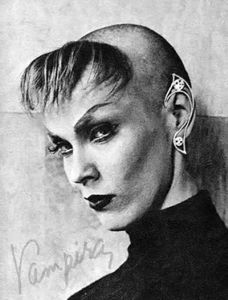 For a woman who spawned a whole subculture, Nurmi flew under the radar for far too long. Born Maila Syrjäniemi, she grew up in Oregon before heading to Hollywood to find fame and fortune. She worked as an actress, showgirl and cheesecake model, and she made some powerful friends. But she never found a way in until she was spotted by a producer at a masquerade ball while dressed as the character who came to be known as Morticia Addams.

Nurmi wasn’t your average ’50s woman. She was an esoteric beatnik chick who held contemporary ideals in disdain. Accordingly, to her Vampira was more than a vehicle to sell advertising during cheesy late-night horror movies. She saw the character as a way to upend traditional feminine archetypes. Nurmi was more comedic performance artist than actress, and the role eventually began to bleed over into her real life. (It should be noted that the title Vampira and Me refers not to the director Greene and Vampira, but to Nurmi and her creation.)

Per Andy Warhol, new sensations are allotted their 15 minutes of fame, and then the world moves along, looking for the next big thing. But the same was true in the 1950s and when Nurmi got snared in a contract dispute with the local TV station that employed her, she was abruptly canceled. Nurmi managed to parlay her fame into a few gigs, but without a way in which to keep Vampira in the public eye on a regular basis, the character’s popularity eventually faded, And, sadly, so did Nurmi.

Nurmi’s is a typical Tinseltown story. She was welcomed, then chewed up and spat out. And Greene’s film, built around an extended 1997 interview with Nurmi, tells it quite well. He creates  a detailed depiction of the era and then shows how Nurmi fit in — or, more accurately, didn’t fit in.

The 75-year-old Nurmi was a sharp, articulate, insightful woman. During her interview with Greene, she’s exceedingly open and honest, even when delving into the most personal and painful areas of her life, such as her friendship with James Dean.

She met Dean before he was a star. The moment they saw each other, they recognized themselves to be kindred spirits and formed a close bond that began to dissolve as he gained fame and she lost it. When he died, the tabloids exploited their relationship and Vampira’s witchy reputation, claiming that Nurmi had cursed Dean. It was a blow from which Nurmi would never truly recover.

Though little footage of Nurmi as Vampira exits today, Greene has compiled what there is and uses it wisely in Vampira and Me. Combining interviews, kinescopes and period audio and visuals, Greene has made a documentary that stays away from the typical trap of talking heads and, instead, delivers an enthralling portrait of his subject.

Maila Nurmi was a survivor who’d been through the wars and lived to tell the tale, with no anger and no regrets. And Vampira and Me is a fitting, though long overdue tribute to a woman who never got the credit she deserved.

This article was posted in Reviews and tagged Austin Film Festival, documentary, horror, Maila Nurmi, R. H. Greene, Reviews, Slammed & Damned, Theron Neel, Vampira, Vampira and Me. Bookmark the permalink. Follow comments with the RSS feed for this post.Trackbacks are closed, but you can Post a Comment.