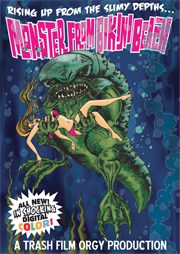 It seems there’s an ancient evil preying on the bathing beauties of Bikini Beach, and the delightfully named TV news reporter Raquel Vanvanderzander (Stephanie Hyden) is determined to crack the case, with the help of her old pal, tabloid photographer Archie “Scoop” Barclay (Galen Howard).  But how will this affect the dancers in the all-night go-go contest at the local tiki bar? What part do corrupt detective Sammy Payday (Steven Vargo) and his sweet, clueless girlfriend Boom Boom (Laura Stahl) play in the plot? And what of Noodlin’ Stu (Keith Letl) and Fanny Jo (Liesel Hanson)? Questions, questions, questions… 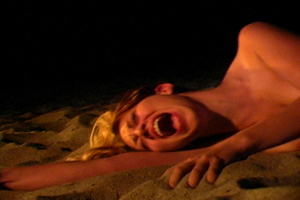 Director/writer Darin Wood and Christy Savage, his producer and cinematographer, have given us an almost perfect example of the beloved Three B’s: Blood, Boobs and Beasts. It could even be said that this film is ambitious—and that’s pretty much the only problem I have with Monster From Bikini Beach. Don’t get me wrong. I love an ambitious movie, but Wood has taken a perfectly good beach party/monster flick and gummed it up with an inane film noir side story. Consequently, the film is three movies in one, but only two of them are executed well. As long as the film concentrates on the bikini go-go girls covered in day-glo body paint or the giant walking catfish creature that feeds upon them, it’s amazing. But as soon as Sammy Payday shows up with his muddled scheme to cash in and get out, accompanied by wooden, rambling voiceovers, the film stops dead. Also, a major part of the movie is spent setting up and building to the go-go dance contest. But when the contest finally occurs, we don’t really see it, which is a major let-down. Why would a bikini movie with a dance contest as a major plot point squander the chance to show groovy chicks dancing in the contest? Sure, there already is plenty of dancing in the film, but this time it would’ve actually contributed “dramatically” to the story.

But let’s focus on what Monster From Bikini Beach gets right. There are lots of cute go-go girls in bikinis, and a majority of them lose their tops at some point. The cheesy mutant catfish creature is awesomely rendered. The flick gets better every time the monster rambles across the screen, chasing and mutilating sexy girls. Speaking of mutilation, there are some admirable gore effects and buckets of splattered blood on display. One thing that caught my eye was the remarkable look of the film. Sure, this is a very low-budget production, but Christy Savage has taken the time to include some superbly composed shots. The film looks just extraordinary. It has a soft glow and nice use of color that completely took me by surprise.

As everyone knows, any beach movie worth its sand needs a rocking soundtrack. So it helps that the producers have managed to snag a scad of swinging neo-surf bands, including the Pyronauts and the Hypnotic IV.

Now, I’d be remiss if I didn’t single out a few of the performances. Stephanie Hyden may not make a convincing news reporter, but she’s an entertaining screen presence and, hey, she looks good in a shower. As her budding love interest, Galen Howard seems to be doing a fair impression of indie star Jeremy Davies…at least, his hands are. As Boom Boom, Laura Stahl is a bikini-clad sweetheart. All Boom Boom wants is to win the big dance contest and make her man proud, and Stahl crafts a fun, charming character here.

But my favorite performance comes from the lovely Liesel Hanson, with her turn as the ballsy swamp cutie Fanny Jo. L’il Fanny Jo ain’t afraid of nothin’ or nobody, and Hanson is hilarious in every scene she steals—which is every scene she’s in.