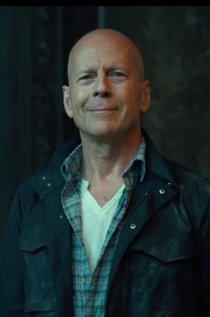 In a list of the all-time unluckiest movie characters, John McClane would have to rank near the top.

Think about it. McClane, the snarky cop played by Bruce Willis in four Die Hard films, has crossed paths with (a) East German terrorists led by the ultimate Euro-villain, Hans Gruber, (b) a squad of mercenaries led by a U.S. Army Special Forces colonel gone rogue, (c) a terrorist named Simon, who turns out to be Hans Gruber’s brother and who forces McClane to engage in a twisted game of Simon Says, and (d) a group of cyber-terrorists and assassins who take McClane’s daughter hostage. And I’m not even getting into the various annoying supporting characters he’s had to deal with along the way.

Of course, perhaps I’m being a pessimist — McClane did triumph in each and every instance, so maybe he’s really one of the luckiest movie characters of all time. In any case, Bruce Willis is definitely one of the luckiest actors of all time, because he’s managed to latch onto a role that fits him like a tight, smirking glove and ride it through 20 years and, with the upcoming release of A Good Day to Die Hard, five fairly decent action flicks.

This time out, McClane is going up against the Russians, specifically a Russian general who plans to assassinate the President of the United States…which begs the question, who’s left for the “007 of Plainfield, New Jersey” to protect in the next Die Hard movie? I mean, obviously the villains will be the Chinese (or possibly the North Koreans), but after you’ve saved the president, it’s all pretty much downhill.

This article was posted in Updates & Teasers! and tagged A Good Day to Die Hard, action, Bruce Willis, Die Hard, John McClane, Sequels, Slammed & Damned, Theron Neel, Trailers, Updates & Teasers. Bookmark the permalink. Follow comments with the RSS feed for this post.Trackbacks are closed, but you can Post a Comment.