When the Hero Takes a Fall — Crave 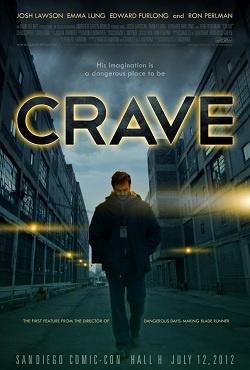 Self-perception is a tenuous thing. Everybody wants to think of themself as a good person, even when they do bad things. And especially if they do these bad things for good reasons. This is the slippery conceit explored in Crave, the darkly comic first feature from director Charles de Lauzirika.

Crave follows Aiden (Josh Lawson), a freelance photographer who documents violent crime scenes on the mean streets of Detroit with the help of his buddy Pete (Ron Perlman), a world-weary homicide detective. Aiden’s a nice guy, despite the voices in his head that constantly hector him, telling him he’s a coward or that people that do bad things deserve to die. But, hey, everyone talks to themself, right?

Aiden realizes something’s off. His constant observations of the dark side of humanity are taking their toll and his revenge fantasies are getting stronger. If only he had the guts to follow the voices and take action, he’d be a better, happier man. Then, one day, he does. And he is.

Starting small, Aiden accidentally voices his hateful, nonstop internal dialogue when a lady bumps into him in the grocery store. It’s slightly embarrassing, but more freeing than he’d thought possible. When he stumbles upon an abandoned pistol one night, he takes action again. Taking the weapon home, he finally has the means necessary to be the hero he knows himself to truly be…that is, until things turn to shit.

Crave is a movie of degrees. Each step Aiden takes in his quest toward twisted self-actualization is small, which is why it feels so realistic. Lawson does an admirable job of making Aiden a likable, sympathetic figure even as he’s doing unlikable, unsympathetic  things. And as Virginia, a hesitant younger neighbor with whom Aiden strikes up an obsessive relationship, Emma Lung does striking, nuanced work. Oh, and Edward Furlong turns up late in the film in a small, yet pivotal role in which his inherent weaseliness is put to very good use.

In a Q&A following the screening at Fantastic Fest, de Lauzirika remarked that Aiden is a mixture of “Travis Bickle and Walter Mitty,” and that’s pretty much a perfect description. The darkness dwelling within Crave is counterbalanced by a fantastical sense of humor that makes the film easier to take, much in the way a spoonful of sugar makes the medicine go down.

That’s not to say that Crave is hard to watch; it’s not. But for a while, I wasn’t sure how I felt about it. It’s extremely well made and the performances are stellar, but for some reason it didn’t sit right with me. I couldn’t get a handle on it. Then I had a revelation — perhaps I identify with Aiden more than I’d like to admit. As a writer, I probably live in my head more than most people. Is it possible that Crave is too effective? Dammit. If only I had the guts to follow the voices and take action…