In Antiviral, director Brandon Cronenberg has created a world that’s just left of reality. Though it’s a world filled with technologies that don’t exist (yet) and populated with people with desires that don’t exist (yet), it’s absolutely recognizable and totally believable. And that might be the most disturbing thing about this film.

After premiering at Cannes and playing at the Toronto International Film Festival, Antiviral made its U.S. premiere at Fantastic Fest, where it’s been one of the must-see screenings, with good reason. Cronenberg’s debut feature is a mesmerizing speculative thriller filled with arresting imagery and disquieting twists that, yes, at times recall the work of his father, David, but combine to create something different enough to indicate the emergence of an original voice.

In the world posited by Antiviral, society’s fascination with celebrity has grown to such a degree that people don’t just want to look or dress like their idols; they want to share their diseases as well. So, naturally, an industry has been built around this obsession. Famous people sell their illnesses to companies which then patent them and market them to the general public, much as is done with celebrity fragrances today.

Syd March (Caleb Landry Jones) works for a company whose hottest sellers are the diseases of Hannah Geist (Sarah Gadon), a woman who seems to be famous for nothing but her beauty. When Syd infects himself with the only sample of the virus that kills Hannah, he becomes a hot commodity — a human Petri dish desired by a shady corporate underworld willing to do anything to obtain Hannah’s very lucrative disease. 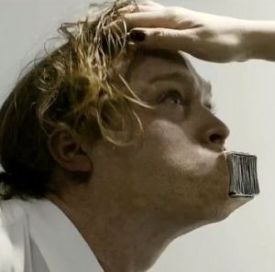 Much has been written comparing Antiviral to the work of Brandon Cronenberg’s dad and, as I mentioned, there are similarities to the elder Cronenberg’s visceral techno-surrealism — flesh is penetrated, bodily fluids are spilled, societal norms are upended. But as I watched the flick, I found myself reminded more of the slow burn and grand, spartan frames favored by the late Stanley Kubrick. In any case, that I thought of other filmmakers while watching Antiviral is enough to suggest that while Cronenberg is obviously talented, he is still a work in progress.

As good as the film is, Antiviral bides its time a little too much. Cronenberg is perfectly content to have his characters do things that make no sense for quite a while, leaving us to wonder what’s happening and why. Of course, all is revealed eventually, but the director doesn’t coddle his audience, and that’s not a bad thing. Yet, Antiviral sometimes moves so slowly, it risks losing our attention before the payoffs arrive…and that is a bad thing.

Cronenberg’s script takes on more than just our fixation on celebrity. Antiviral also touches on such contemporary themes as Big Pharma, corporate espionage, black and gray market economics, personal freedom and even the monotony of cubicle culture. This might sound like an unusual combination of elements, but in mixing the bizarre and the banal, Cronenberg creates a reality that is both unsettlingly familiar and darkly funny.

It’s impressive that Cronenberg’s vision is so believable, but it’s also rather disheartening. By tackling present-day issues and extrapolating them to their logical, yet extreme conclusion, Antiviral does what speculative fiction is meant to do: It makes us consider the modern world and where it’s headed. And after spending a couple of hours with Cronenberg’s suppositions, I’m not sure I like where this is going.