Better Than Christmas — The American Scream 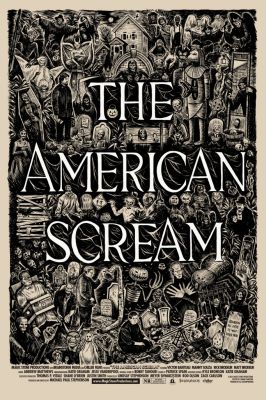 Let’s get one universal truth out of the way up front: When you’re a kid, Halloween is the best night of the year. Yeah, Christmas runs a close second, but Halloween is like Christmas with monsters and nothing beats that.

One of the things that makes Halloween so special is that crazy neighbor who, one night a year, goes out of his way to turn his suburban three-bedroom ranch house into a supremely scary, if somewhat tacky, haunted house. If you’ve ever wondered what motivates that guy, you need to see The American Scream, a wonderful new documentary that premiered at Fantastic Fest last night.

With The American Scream, director Michael Stephenson, who previously gave us the Troll 2 doc Best Worst Movie, focuses his gaze in the hamlet of Fairview, Massachusetts, where he has discovered three very different households that have one thing in common: They are home haunters (aka “that crazy neighbor who, one night a year, goes out of his way to turn his suburban three-bedroom ranch house into a supremely scary, if somewhat tacky, haunted house”).

As with many docs today, The American Scream doesn’t set out to unearth any hard truths; it simply follows some ordinary, yet quirky characters about their “normal” routines and attempts to show us these people’s motivations and, in doing so, remind us that even though we’re all different, we are more alike that we think.

This time, Stephenson introduces us to a family led by a dad who is a haunt perfectionist in an effort to atone for a disappointing childhood, a regular guy who haunts because it’s fun, and an eccentric father/son team who haunt because it’s a way to keep each other safe from the world at large.

Stephenson picks up the story a month before Halloween and counts down to the big day, following each household’s haunting preparations while peeking behind the curtain at their lives, looking at their past and present, including how their friends and family deal with their scary obsession.

The American Scream has been described as heartwarming, at that’s not wrong. While his new movie doesn’t dig as deep as it might, Stephenson has a good eye and delivers an amiable look at some interesting characters — and though they are involved in one of childhood’s greatest pleasures, by the time The American Scream ends, one thing is clear: Halloween is not just for kids.

This article was posted in Reviews and tagged Documentaries, Fantastic Fest, Halloween, Manny Souza, Matthew Brodeur, Michael Stephenson, Reviews, Richard Brodeur, Slammed & Damned, The American Scream, Theron Neel, Victor Bariteau. Bookmark the permalink. Follow comments with the RSS feed for this post.Trackbacks are closed, but you can Post a Comment.