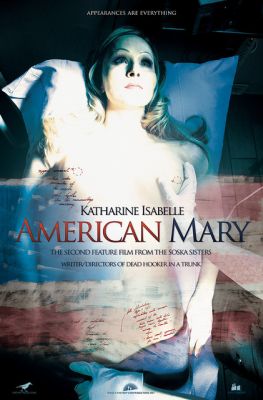 When directing team Jen and Sylvia Soska first emerged from the Canadian tundra (well, metropolitan Vancouver, anyway) bearing a bunch of talent and a bedraggled little low-budget feature called Dead Hooker in a Trunk, they were an unknown entity. My, how times have changed.

Thanks to a relentless touring schedule, a gift for self-promotion and that above-mentioned bunch of talent, the Soskas quickly became indie icons. Their Dead Hooker played fast and loose and rightfully became a grindhouse sensation.

But that was way back in 2010. What have they done for us lately? Many is the filmmaker that crashed and burned following a fast rise. Oh god, what if it was all a fluke?

Well, the Soskas are back with their sophomore feature, American Mary, which had its U.S. premiere at Fantastic Fest last night. And I’m happy to report that the Twisted Twins’ success is no fluke. American Mary delivers the goods. It’s no Dead Hooker, but don’t despair; that’s a very good thing.

One of the most impressive things about Mary is how completely different it is from the Soskas’ debut. Where Dead Hooker in a Trunk was a gonzo thrill ride, American Mary is a frosty revenge thriller — all warm, pulsing viscera beneath a cool, steely surface.

The Soskas’ American Mary centers on Mary Mason (Katharine Isabelle), a promising young medical student who finds herself overburdened with debt. In order to keep the lights on, Mary begins to explore, ahem, alternative adult revenue sources, which finds her visiting the topless bar owned by the mercurial Billy (Antonio Cupo). While there, she stumbles upon an unnerving opportunity to make some fast cash using her surgical skills. Soon, word has spread throughout the underground that there’s a talented young doctor willing to do ethically questionable operations if the price is right. Make no mistake, Mary is a good person. But even good people have to eat.

Meanwhile, one of Mary’s medical mentors takes an interest in her. But when he invites her to a party and his immoral intentions are made brutally clear, Mary finds herself wreaking ironically pitiless revenge in a way only an ethically casual surgeon could manage. 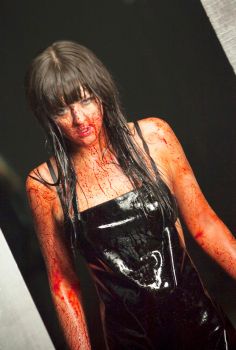 Since she broke through in Ginger Snaps back in 2000, Katharine Isabelle has been working steadily, building a career as a character actress and proving her talent. But her work in American Mary is revelatory. Isabelle gives a mature, wry performance that charts Mary’s tumble down a slippery slope into a moral quagmire. Her Mary covers a gamut of emotions, but does so quietly, saying more with her eyes than most actors do in a soliloquy.

One of the things that makes American Mary work as well as it does is the world the Soskas have built. They’ve constructed a fully realized netherworld populated with amiable gangsters and kooky body modification enthusiasts that draws you in even as it repels you. Antonio Cupo’s Billy might be slightly unhinged — well, more than slightly — but he’s also a concerned friend. And Tristan Risk’s scene-stealing turn as Beatress is deeper than it appears. It’s easy to laugh at the “Betty Boop on acid” characterization, but there’s a pain in Risk’s eyes that’s hard to forget.

Every aspect of this film is more ambitious than the Soskas’ debut. They have managed the trick of seemingly ratcheting up every level (the story is more layered, the gore is more extreme), but keeping the film very measured and deliberately paced — at times, too deliberately paced. American Mary moves along nicely, putting all the pieces into place, but it seems to slow down perhaps a little too much going into its third act.

What truly proves the Soskas have grown as filmmakers is the ending they’ve found for their Mary. Not to compare the two, but Dead Hooker was a lot of fun, yet it rarely looked beyond the exterior. By the time American Mary comes to a close, the emotional stakes have been raised to the point where the cumulative effect hits you hard.

And maybe that’s what makes American Mary such a wonderful surprise. It’s not just that it’s different than Dead Hooker in a Trunk. It’s deeper.