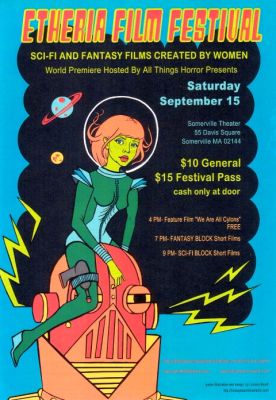 The women of Viscera have done it again. Not content with shining a light on the works of talented female horror filmmakers, Shannon Lark and Heidi Honeycutt (editor-in-chief of Planet Fury)  have organized the Etheria Film Festival, a new juried fest dedicated to highlighting the best new short fantasy and sci-fi films made by women.

Taking place this Saturday (September 15) at The Somerville Theater in Somerville, Massachusetts, the Etheria Fest will be screening 15 short films in competition. Among those assisting Honeycutt and Lark in the judging process are filmmaker Rachel Talalay, director of the awesome cult fave Tank Girl; Harvard Film Archive conservator Liz Coffey; superstar horror blogger Andre Dumas; and director/blogger/illustrator Stacie Ponder — yes, the Final Girl herself! Also being shown is We Are All Cylons, a documentary that looks at the rabid fandom inspired by Battlestar Galactica.

I asked Honeycutt why she felt the need to establish another film fest devoted to women filmmakers. “As the programmer of the Viscera Film Festival, I get to see all kinds of amazing films directed by women,” Honeycutt told me. “We get so many submissions that we have to turn away some really good movies. I started noticing that some entries were awesome, but just a little too sci-fi or more fantasy than horror. I always hated having to turn those films away because otherwise, they were perfectly awesome movies. Then, I decided, wouldn’t it be awesome to showcase some of these sci-fi and fantasy films with their own festival? Etheria was born.”

Lark chimed in, saying, “Etheria was created by Heidi. At the Viscera Organization, we are all about supporting brilliant filmmakers, so Heidi threw out the idea and we ran with it. We hope to foster Etheria and help it grow, like some sort of weird fantastic alien creature-thing, complete with purple unicorn blood.”

Helping make Etheria a reality are Mike Snoonian and Chris Hallock, the proprietors of the website All Things Horror. Aside from running one of the best horror sites on the inwebternet, Hallock and Snoonian also host a kickass monthly screening series at The Somerville Theater. So, when they heard Honeycutt and Lark were looking for a partner to help with Etheria, Snoonian and Hallock not only volunteered to host the fest, they also found a home for it at The Somerville.

When  contacted for a quote about the event, Hallock said, “We’re honored and humbled to be recruited by Heidi and Shannon to help them launch Etheria into the cinematic stratosphere.” (He then fell to his knees, sobbing, and begged me to ask Honeycutt to release his family unharmed. I told him I couldn’t promise anything but, if he knows what’s good for him, Etheria better go off without a hitch.)

Oh yeah, and about the name Etheria? “I chose the name Etheria,” Honeycutt said, “because it is the home planet of She-Ra, the animated Princess of Power spun off from He-Man and the Masters of the Universe. She-Ra stands for just about everything wonderful about women in sci-fi and fantasy, so I thought it was a perfect name for the festival.” Indeed.

If you’re anywhere close to Boston this weekend, you should absolutely check it out. Visit the official Etheria Film Festival website for tickets and the schedule of all films being screened. With films coming from as far away as Australia, Etheria is truly an international fest and proves that women the world over are creating cinematic works as good as anything made in Hollywood.

This article was posted in Other Awesome Stuff and tagged All Things Horror, Andre Dumas, Chris Hallock, Etheria Film Festival, He-Man and the Masters of the Universe, Heidi Honeycutt, Liz Coffey, Mike Snoonian, Other Awesome Stuff, Planet Fury, Rachel Talalay, Shannon Lark, She-Ra, Slammed & Damned, Stacie Ponder, Tank Girl, The Somerville Theater, Theron Neel, Viscera Film Festival, We Are All Cylons. Bookmark the permalink. Follow comments with the RSS feed for this post.Trackbacks are closed, but you can Post a Comment.