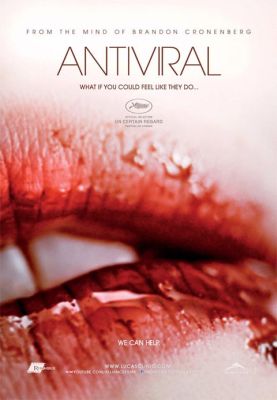 The trailer for Brandon Cronenberg’s Antiviral is out, and all I can say is like father, like son.

Addressing a present-day issue and extrapolating it to its logical, yet extreme conclusion, Antiviral is an example of what speculative fiction does best. And the issue Cronenberg (son of David) looks at in his debut feature is contemporary society’s fascination with celebrity.

Playing on the real-life instances of people going to extremes to be like their idols, Cronenberg ramps it up to 11. In Antiviral, people don’t want to merely look or dress like their favorite celebrities, they want to share their diseases.

Antiviral is a genre buster that mixes horror and sci-fi elements with an old-fashioned detective tale. After accidentally being infected with the disease that killed superstar Hannah Geist (Sarah Gadon), Syd March (Caleb Landry Jones) must unravel the mystery surrounding her death to save his own life, which becomes increasingly difficult as his symptoms increase — a kind of futuristic take on D.O.A., the classic film noir.

Also starring Douglas Smith, Nicholas Campbell and Malcolm McDowell, Antiviral seems to prove that artistic temperament is an inheritable trait. The film has a cool, antiseptic aura reminiscent of the elder Cronenberg’s most memorable work, but it’s obviously the product of a contemporary artist.

As proof that this is the work of a 21st century filmmaker, Antiviral even has its own viral website. Stop by The Lucas Clinic.com and see what they can do for you. The range of services available is absolutely frightening.