Poor New Orleans. Seven years after being hit by Hurricanes Katrina and Rita, the Crescent City is doing battle with what look to be two new calamities: the upcoming movies from Nicolas Cage and Sylvester Stallone. 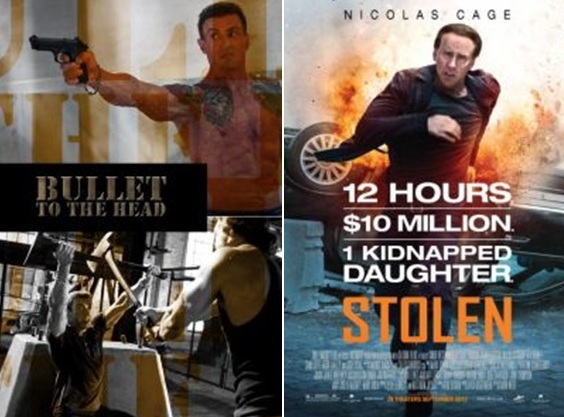 An odd twist of fate finds Stallone’s Bullet to the Head and Cage’s Stolen both set in the Big Easy. An even odder twist of fate finds the trailers for both flicks released in the same week after the films themselves have been sitting on the shelf for more than a year. A twist of fate that’s not at all odd is the fact that both movies look like stinkers. Actually, that’s not really a twist of fate. That’s just reality; therefore, I guess the universe remains in balance.

Bullet to the Head (formerly titled Headshot) is the story of an aging hit man, played by Stallone, whose partner is whacked. So, of course he teams up with a young Asian-American cop (whose partner was coincidentally whacked by the same guy) to track the whacker, which I hope is really the guy’s name. Oh, and I specify that the cop is young and Asian-American because this odd couple pairing seems to be pretty important to this ’80s-style action romp from director Walter Hill, who gave us a similar odd couple pairing in the actual ’80s action romp 48 Hrs. Bullet to the Head also stars Sung Kang, Christian Slater, Jason Momoa and Sarah Shahi, who I like a lot — I hope this misfire doesn’t put a bullet in the head of her career. (Ho HO!)

Stolen looks to be Cage’s version of Taken, the unexpectedly compelling Liam Neeson thriller from a couple of years ago. In Stolen (formerly titled Medallion), Cage plays an ex-con whose teenage daughter is kidnapped by his former partner (Josh Lucas, who looks to be trying “out-Cage” Cage), who wants Cage to come up with a ton of money or something. And things explode. Stolen was directed by Simon West, who specializes in “and things explode” movies, so there’s that. And if that doesn’t do it for you, consider this: Stolen might be the only time you get to see Malin Ackerman and Danny Huston in the same movie!

New Orleans is one of the most beautiful cities in the world, but it’s also one of the toughest. If it can come back from Katrina and Rita, it can definitely handle these dueling disasters. The sad thing is, it shouldn’t have to.