Lou Ferrigno Is the ‘Liberator’

Bad guys beware. There’s a brand-new superhero in town. He’s called the Liberator and he’s played by Lou Ferrigno, a guy with more than a little experience in the realm of comic book heroes. 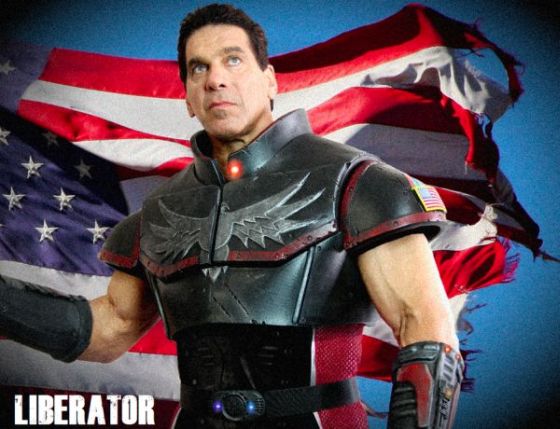 Liberator is the story of Ed Migliocetti (Ferrigno), an ex-pro football player who gave up his career to join the military. After being drafted into the “Enhanced Abilities Initiative,” Ed was dubbed the Liberator and teamed with a group of fellow “supers” known as Sidewinder, Gaia and Volt. Though he soon found himself doing the government’s dirty work — assassinations, regime changes, infrastructure sabotage — Ed followed orders. He was a good soldier.

But when a mission went bad, Ed was set up as the fall guy and sent to prison as a traitor. After a decade behind bars, Ed is released and determined to set the record straight. But his efforts aren’t appreciated by those who threw him under the bus. So they send the only people able to take him down. That’s right, the Liberator will have to battle his former teammates. In Liberator, it’s superhero against superhero, and may the best power win!

The brainchild of Jim Cirile and Aaron Pope, Liberator is chock full of genre favorites. Besides Ferrigno (TV’s Incredible Hulk), Liberator features Michael Dorn (Star Trek: The Next Generation), Don “the Dragon” Wilson (Bloodfist), Peta Wilson (TV’s La Femme Nikita) and indie horror queen Tara Cardinal (Wrath of the Crows), who’s really been on a roll lately. Also appearing are Jessica Andres and the amazing Ed Asner, who plays what seems to be a very evil President of the United States.

Liberator is being described as a TV pilot masquerading as a short film. Accordingly, it’s having its world premiere on August 11 at the legendary Grauman Chinese Theater as part of the eighth annual Holly Shorts Film Festival. The fest starts at 6:30 P.M., and tickets are $8 ($12 at the door) and can be ordered in advance HERE.

If you’re anywhere near Hollywood next month, drop in and check it out. It’s going to be cool seeing Ferrigno suit up to do what he does best: get angry and smash some bad guys. And contrary to popular belief, you like him best when he’s angry.