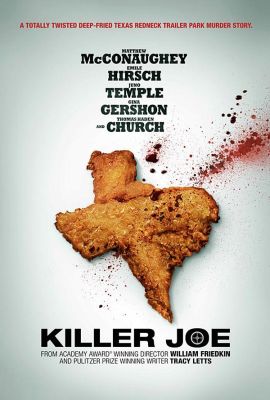 When I walked out of the theater after Killer Joe, director William Friedkin’s new film, I was sure of a couple of things. First, Friedkin might be nearing 80 years of age, but he has more guts than almost any other filmmaker on the scene today. Also, I knew I’d never look at a piece of fried chicken the same way again.

Killer Joe is the latest collaboration between Friedkin and Pulitzer-winning playwright Tracy Letts. If you remember their work on 2006′s psychodrama Bug, then you have an idea of what you’re in for this time around. But prepare yourself. Yes, Bug was twisted, but Killer Joe takes twisted to a whole new height. The pair have delivered a flick that’s something of a degenerate onion of a movie; each layer peels away to disclose a whole new wonderful level of perversity.

Starting as a fairly standard crime tale, Killer Joe revolves around the trouble Chris (Emile Hirsch) has gotten into with a local Dallas drug lord. It seems Chris owes a lot of money for some cocaine he swears his mom stole, and if he doesn’t repay his debt, well… So, he heads to the trailer park to discuss a solution with his dumb-as-a-stump dad, Ansel (Thomas Haden Church). What if they had Chris’ mom killed and split the $50,000 life insurance payout — Chris could pay off the drug dealer, and Ansel and his shrewish new wife, Sharla (Gina Gershon), and Chris’ sister Dottie (Juno Temple) could split the rest. Chris even has an assassin in mind: a local police detective who moonlights as a hit man and goes by the name Killer Joe (Matthew McConaughey).

The film quickly veers into neo-noir territory and there are complications, twists, turns, crosses and double crosses. What began as a thriller soon shifts into a darkly funny examination of family dynamics before morphing into a unflinchingly brutal black comedy. Killer Joe doesn’t fully reveal itself until the final frame — Friedkin closes his film in a way that allows the audience to decide for themselves how the story ends and proves that he knows as much about torture as his title character. 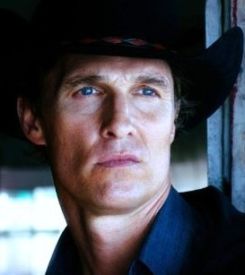 Actually, the character Killer Joe parallels the film he’s named for. At first, McConaughey plays Joe as a serious, focused, even thoughtful man. But once the innocent woman-child Dottie catches his eye and he throws in with Chris’ family, Joe shifts into something, or someone, else entirely. About the time the once circumspect Joe cold-cocks Sharla and forces her to her knees to fellate a piece of KFC, it becomes exceedingly clear what delightfully twisted fucks both Killer Joe and Killer Joe are.

Adapted from Letts’ first play, Killer Joe is very much an ensemble piece. Accordingly, it’s hard to single out any one member of the film’s excellent cast. Every performance rivals each actor’s best work, but I suppose McConaughey ranks first among equals. He modulates his performance artfully, taking Joe to almost operatic heights but managing to pull back just before he reaches the level of caricature. His scenes with Juno Temple crackle with electricity and heat. Temple’s Dottie is in the vein of Carroll Baker’s work as the sexy Baby Doll in Elia Kazan and Tennessee Williams’ steamy 1956 classic, yet Letts has written the character in a way that allows Temple to forge something new from the woman-child tradition.

But if any player here gets a “Good Sport” medal, it’s Gershon. Every indignity and  manner of terror is rained down upon the actress, but she nails her role with a bravery and lack of vanity that’s admirable. And while I hate to say any character deserves this sort of treatment, hey, her Sharla is a nasty piece of work. 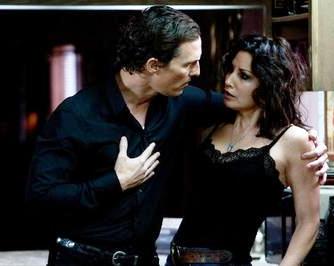 The earlier reference to Tennessee Williams is apt. Letts has written a contemporary Southern Gothic tale, one full of high drama, dark comedy, and physical and psychological viciousness. So much so, Killer Joe was assigned an NC-17 rating  for “graphic disturbing content involving violence and sexuality, and a scene of brutality.”

Fair enough. Killer Joe pulls no punches. No one is innocent, and the nudity and cruelty are constant, but they can’t be called gratuitous in this context. Luckily, Friedkin knew how to translate Letts’ crazed narrative to the screen with a simple elegance and just enough visual panache to open it up but not drown it. When the violence and blood come in Killer Joe, they come quickly and realistically — and they mean something, unlike so many other movies where the body count rises in direct proportion to the audience’s boredom. Trust me, you might be aghast by Killer Joe, but you won’t be bored by it.

Much has been written about this flick being sadistic trashy fun, and it is. But it’s also well-observed, intelligent and exceptional. Go see Killer Joe for the shock value, if that’s what it takes. But admire it for what it truly is: first-class entertainment for adults — something Hollywood doesn’t really make anymore. Thank you, William Friedkin, wherever you are.