Robert Rodriguez’s latest round of Machete Kills stunt casting finds Lady Gaga slipping into her acting corset to assay the role of La Chameleón, a character for which she seems utterly perfect (because Gaga always looks different) and completely wrong (because no matter how much she changes her appearance, Gaga is still absolutely identifiable). And, yes, I know this article’s title is technically incorrect, but it’s the only chance I’ll ever get to write that headline and have it be even close to appropriate…unless there’s some sort of terrible accident during filming, which no one wants. Right? 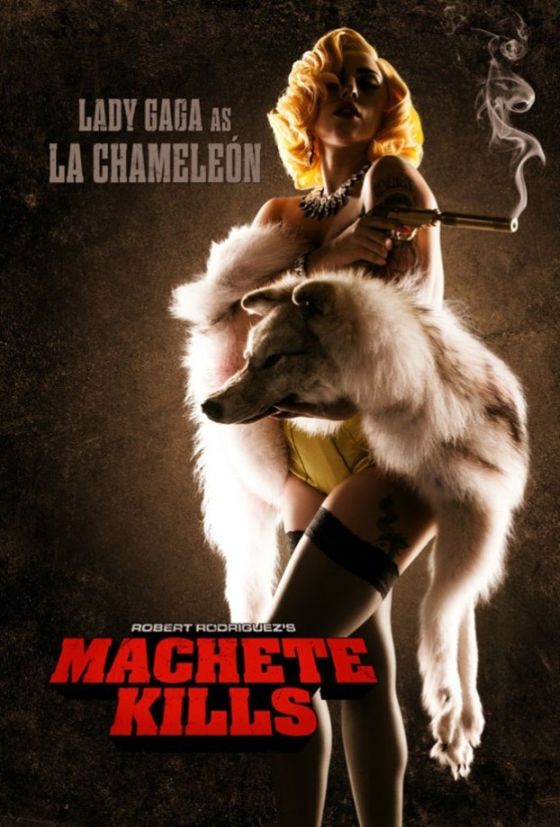 As is done these days, both Rodriguez and Gaga exploited utilized Twitter to announce the pop star’s appearance in the follow-up to Machete. “I just finished working with @LadyGaga on @MacheteKills, she kicked SO MUCH ASS! Holy Smokes. Blown away!” Rodriguez exclaimed hyperbolically.

Not to be outdone, Gaga ramped it up (strategically employing even more ALL CAPS!!!) and countered with: “Yes its true, I will be making my debut as an actress in the amazing MACHETE KILLS BY @RODRIGUEZ IM SO EXCITED!!! AH! Filming was insane.” Of course this, like my headline, is technically incorrect, because Gaga has acted before — don’t tell me you forgot her searing portrayal of Girl at Swimming Pool #2 in the 2001 episode of The Sopranos titled “The Telltale Moozadell.”

As announced HERE, Rodriguez has stocked his new flick with a veritable smörgåsbord of actresses. The Lady Gaga isn’t to your liking? Try a little Amber Heard, or maybe the Jessica Alba. Ooh, the Michelle Rodriguez is fabulous! Or how about a little Zoe Saldana or Sofia Vergara?

But that’s not all of the casting news. Machete Kills has also received another dose of testosterone. Aside from the previously announced Mel Gibson, Tom Savini and Demián Bichir, Rodriguez has also cast self-proclaimed winner Charlie Sheen as the President of the United States because get it?

Admittedly, some of Rodriguez’ choices are veering hard into the realm of wink-wink, but I’m still excited about Machete Kills. And I will remain so until next week when Rodriguez will hopefully not announce that Nadya Suleman (aka Octomom) has taken a cameo as a “Mexican harlot” in the “leather-clad” Madame Vergara’s brothel.

Wait, now that I see that in print…