Are You Ready to See Dracula’s Hiney on TV? 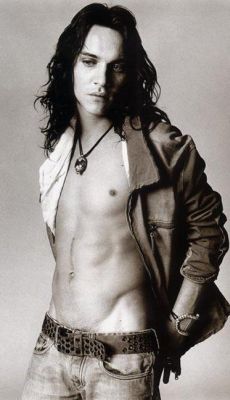 Actually, because this new Dracula series is on NBC, I suppose you probably won’t really see the Count’s butt. What? Oops, I seem to have buried the lede.

According to Deadline, NBC has optioned a new 10-episode series called Dracula, with Jonathan Rhys Meyers starring as the iconic prince of darkness. The women reading this might remember that Meyers’ last role was the anachronistically super-sexy King Henry VIII on Showtime’s popular historical softcore drama The Tudors.

Coincidentally, Dracula is being described as “Dangerous Liaisons meets The Tudors,” which means Drac should be bedding nubile villagers and dropping trou every episode…but as I mentioned in the first paragraph, since this is on network television, likely all we’ll get are some short, sheer nightgowns; deep, wet kisses; and the Count’s bare, rippling chest. (Example of Meyers’ bare, rippling chest on right — Ed.)

Set in the 1890s, the series focuses on Dracula as he “arrives in London, posing as an American entrepreneur who maintains that he wants to bring modern science to Victorian society. In reality, he hopes to wreak revenge on the people who ruined his life centuries earlier but falls hopelessly in love with a woman who seems to be a reincarnation of his dead wife.” Yow. So, it sounds like what we have is a Victorian-era, vampire-filled version of Revenge, ABC’s hit nighttime soap.

Though they could’ve crammed any generic vampire into the show, I suppose the producers chose Dracula because he’s a rather hot property at the moment; both Sony and Universal have a Dracula feature planned, and there are a couple of modernized takes on the Dracula mythology in the works as well (big screen versions of Justin Cronin’s The Passage and Chuck Hogan and Guillermo Del Toro’s  The Strain ). Oh, and don’t forget the recently announced Starz Dracula, animated Hotel Transylvania or Harker, which transforms mild-mannered Dracula supporting character Jonathan Harker into an ass-kicking Scotland Yard sleuth who’s after the villainous vampire.

Whew! That’s a lot of Dracula headed our way. But only one version is a sudsy, revenge-filled soap opera with Jonathan Rhys Meyers’ bare, rippling chest — and that hot property belongs to NBC. Nicely played, NBC. Maybe this is just what you need to drag yourself out of ratings hell. But, you know, probably not…

This article was posted in Other Awesome Stuff and tagged Dangerous Liaisons, Dracula, drama, Harker, Hotel Transylvania, Jonathan Rhys Meyers, NBC, Other Awesome Stuff, Planet Fury, revenge, Slammed & Damned, Soap Opera, Starz, television, The Passage, The Strain, The Tudors, Theron Neel. Bookmark the permalink. Follow comments with the RSS feed for this post.Trackbacks are closed, but you can Post a Comment.