Those Were the Days — ‘Moonrise Kingdom’ 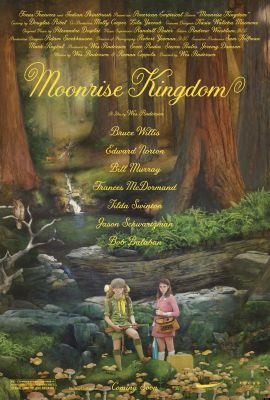 Wes Anderson is one of those polarizing filmmakers. Like Woody Allen, Kevin Smith and Whit Stillman, he’s often accused of making the same film over and over again, and whether or not you like Anderson’s latest flick probably depends on how much you liked Anderson’s previous flick.

If you’re one of those people on the fence about Anderson, Moonrise Kingdom might be the film to finally convert you into a fan. The director’s new movie contains all the Anderson-isms people love or hate or love to hate — the self-conscious camera moves, the over-decorated frames, the heavily curated soundtrack — but there’s a freedom at play here not usually associated with Anderson, a filmmaker who it seems might be more comfortable working with dolls and dioramas than with living, breathing actors (which is perhaps why some felt Fantastic Mr. Fox to be the apotheosis of Anderson’s oeuvre thus far).

The story of two precocious misfits who find in each other the acceptance society denies them, and in doing so discover life does not have to be as terrible as they believe, Moonrise Kingdom is a magical tale that’s part French New Wave and part children’s adventure — a ripping coming-of-age yarn set in 1965, when life was more innocent, yet more cruel than today.

Troubled tween Suzy Bishop (Kara Hayward) comes from a dysfunctional family who favor the classics, though the rebellious Suzy prefers YA fantasy novels and yé-yé music. One fateful summer day, she encounters Sam Shakusky (Jared Gilman), a bespectacled young orphan who lives with a foster family. Recognizing themselves to be kindred spirits, they become pen pals and as their epistolary relationship blooms, they vow to run away together and escape the confines of a world that does not understand nor appreciate them.

So, Suzy packs her belongings and leaves behind her parents (Frances McDormand and Bill Murray), attorneys for whom every conversation is a legal argument, and Sam gathers his camping gear and resigns from his scout troop, led by the dutiful Scout Master Randy Ward (Edward Norton). Together, they literally hit the trail, hiking through the wilderness to follow an old Indian path.

Called in to investigate is Captain Sharp (Bruce Willis), a local policeman with whom Suzy’s mom is having an affair. As Sam and Suzy’s adventure unfolds, Captain Sharp and Scout Master Ward and troop do their best to follow, eventually tracking them to an idyllic cove where the two runaways have pitched their tent and found some measure of shelter from the metaphorical storm that is their pending adulthood. 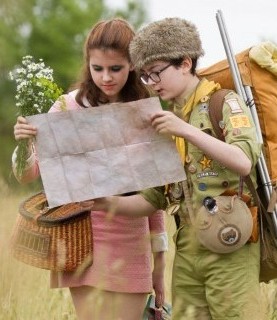 They are dragged back to the real world, where Suzy is locked away and Sam is placed with Captain Sharp while waiting to be turned over to Social Services (personified by Tilda Swinton). Recognizing the injustice being thrust upon the young lovers, Sam’s scout troop decides to rescue Sam and Suzy and stash them away at a scout camp led by the militaristic Commander Pierce (Harvey Keitel), where they meet a fast-talking scout master played by the scene-stealing Jason Schwartzman. The adventures conceived by Anderson and co-writer Roman Coppola continue to intensify, escalating to the point where the only appropriate conclusion is an act of God…well, two acts of God.

As you can tell, Moonrise Kingdom is loaded with story though, amazingly, it never feels like it. The movie flies by breezily, filled with wonderful performances and the director’s patented tonal palette, striking imagery, distinctive dialogue and eccentric characters.

Anderson’s films often feel like cinematic equivalents of classic 20th century short fiction, and Moonrise Kingdom is no different. Though rather than John Cheever or Flannery O’Connor, Anderson is channeling Boy’s Life by way of J.D. Salinger or S.E. Hinton. And while his usual affectations are in place (slow-motion passages and heavy-handed symbolism), Anderson’s work feels less mannered than in previous efforts. His love affair with music of the past continues unabated, this time mining Hank Williams and Benjamin Britten in lieu of his beloved British Invasion bands.

I hate to sound like a movie critic, but Moonrise Kingdom is a grand, romantic triumph. Anderson has managed to capture and communicate all the feelings of blooming adolescence — the excitement, hope, confusion and despondency — so successfully that even his trademark air of twee melancholy can’t squash them. And that, my friends, is an achievement in itself.