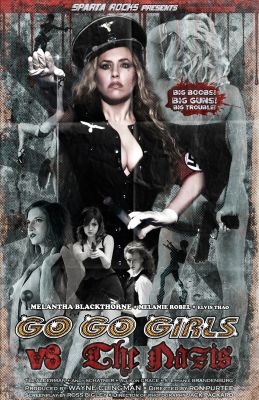 With the recent announcement of Zombies vs. Gladiators, Amazon Studios‘ upcoming Clive Barker project, it’s official: All you need to make a movie these days is a script whose title is composed of two nouns separated by a “vs.”

This approach to moviemaking might seem simplistic and/or lazy, but it has one major thing going for it — everything you need to know about the product film is in the title. And that’s a godsend to a production company’s marketing department.

Obviously, this strategy must work, because producers are returning repeatedly to the Well of Versus. To illustrate my point, the following is a partial list of “vs.” films:

Tucker and Dale vs. Evil

Scott Pilgrim vs. the World

Now, I’m not saying this is a bad thing (truth be told, I’ve seen most of the flicks above and enjoyed more of them than I care to admit); it’s just an observation.

While I’m not all that thrilled about Zombies vs. Gladiators — I’m currently kind of zombied out — there is one “vs.” film that I’m looking forward to. It’s called Go Go Girls vs. the Nazis. Starring Canadian horror queen Melantha Blackthorne, this hopefully soon-forthcoming indie epic features the sure-to-be-unbeatable combination of go-go girls and Nazis!!!

Of course, I didn’t have to tell you that, right? I mean, it’s right there in the title…

This article was posted in Other Awesome Stuff and tagged Amazon Studios, Clive Barker, Go Go Girls vs. the Nazis, Melantha Blackthorne, Other Awesome Stuff, Slammed & Damned, Theron Neel, Zombies vs. Gladiators. Bookmark the permalink. Follow comments with the RSS feed for this post.Trackbacks are closed, but you can Post a Comment.